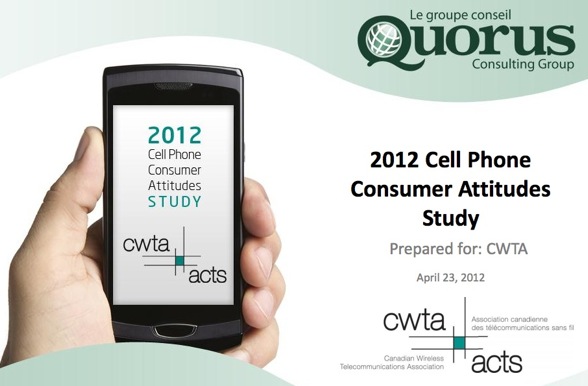 The Canadian Wireless Telecommunications Association (CWTA) recently commissioned a study of the Canadian mobile landscape by the Quorus Consulting Group. The 2012 Cell Phone Consumer Attitudes Study was released at the end of April.

As for data plan usage, it continues to rise as well. Almost 50% of cell phone users pay for a data plan, up 27% from a year ago. App downloads have also increased to 70% of users, with an average of 12 apps per device. Where are the serial downlownders in Cananda? That prize goes to Albertans aged 18-34, as they were noted to being the heaviest downloaders. Apps downloaded by popularity go from weather apps to social networks and then IM apps.

You can check out the full 100 page PDF report here.

Yesterday at the 2012 Canadian Telecom Summit, Bernard Lord, CEO of the CWTA, noted wireless penetration in Canada was set to hit 100 percent in three years (currently we have 26 million mobile users).