Snap has unveiled a new generation of its Spectacles eyewear that puts augmented reality front and center. 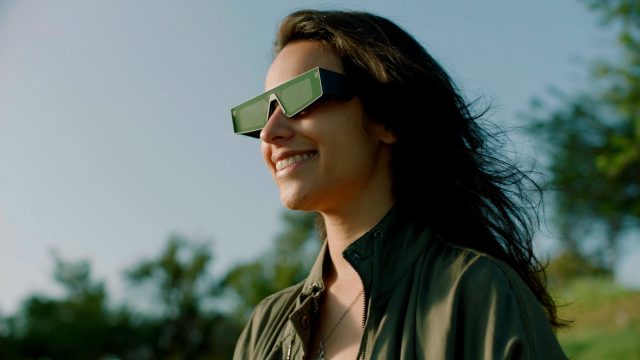 According to a new report from The Verge, Snap CEO Evan Spiegel unveiled the company’s first augmented reality glasses at a virtual developer event called the Partner Summit on Thursday.

The glasses are designed to project digital images over the lenses, and thus overlay virtual objects onto your real-world surroundings.

Past Spectacle products have mainly revolved around using cameras on the glasses to record video and images. This time, the product is being used build a bridge to AR effects, a growing feature on Snapchat.

Unlike the previous versions of Spectacles, which donned bright and playful designs, the AR version looks sharp and serious. It swapped rounded frames and obvious lenses for an angular aesthetic and subtle, front-facing cameras you might not notice at a glance.

The frame also packs four built-in microphones, plus two stereo speakers. As for navigation, there’s a small touchpad on the side that lets you switch between a library of AR effects. According to the report, AR Spectacles weigh 134 grams and can reach up to 2,000 nits of display brightness.

Tapping the vast potential of @Snap’s AR platform, the next generation of Spectacles allow you to overlay Lenses directly onto the world in front of you, for an immersive AR experience. #SnapPartnerSummithttps://t.co/r4XnSC886z pic.twitter.com/UTDDoxwBOO

But while these glasses can display 3D effects onto the real world, are wireless, and have hand tracking, these new glasses are currently aimed specifically at developers and creators who want to use these to explore AR creation on headsets. No price is listed for them, and they’re only available by application.

After all, built-in AR glasses are still in very tentative stages — the new Spectacles, for example, only have a battery life of approximately 30 minutes, which is another reason why they’re not cut out for the mass market.

Spiegel suggested during the announcement that AR glasses will take roughly a decade to reach mainstream adoption. Given its continued commitment to providing users with camera-related, wearable experiences – something that’s entering more intriguing territory with this latest generation — expect Snap to be at the forefront of that adoption with the likes of Facebook.