Starting December 10, Twitter is now making it much easier to share your Tweets on other social media platforms. 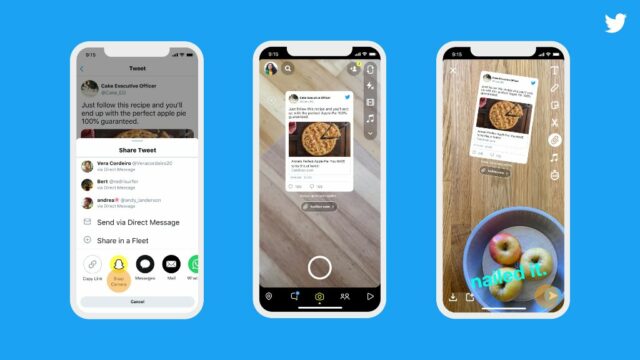 Snap and Twitter have teamed up to let Snapchat users directly share public tweets in a Snap for the first time — a pact the companies hope will boost engagement on both their platforms.

Twitter users can tap the share button on a public tweet (protected tweets cannot be shared) and tap the Snapchat icon. If the user is signed into the Snapchat application on that device and not in the middle of creating a Snap, Snapchat will open directly to its Camera, and the tweet will appear on top of the Camera as an immovable sticker. Tapping the screen activates Lens Carousel for users who wish to use a lens.

Sharing Tweets directly to your Snapchat Stories is now easier than ever. Rolling out today on iOS! pic.twitter.com/0LIHQhmCKu

“Today’s update makes it easier and faster to share tweets to Snapchat and connects more people to the conversations happening on Twitter,” a Snap rep said.