Sonos One Launches in Canada, Spotify Coming in Time for the Holidays

The latest Sonos One smart speaker has launched sales in Canada. The newest speaker from Sonos features touch controls and will soon support voice assistants such as Alexa (when it launches in Canada at some point), Google Assistant and AirPlay 2 in 2018. 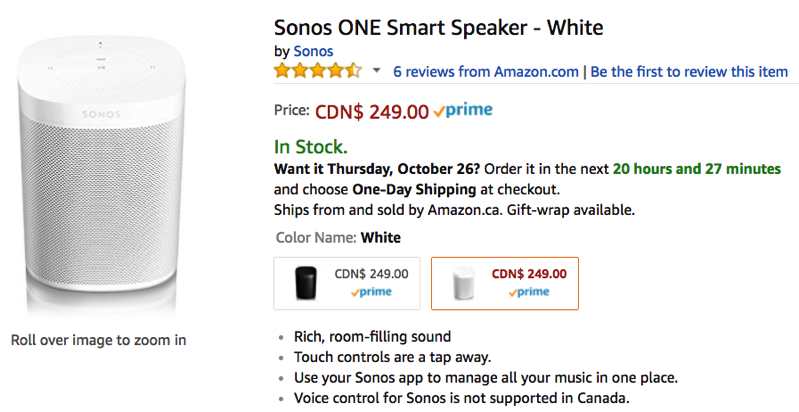 The company confirmed to iPhone in Canada in an email Spotify will be available for the Sonos One, in time for the holidays.

Sonos One is built on the bones of company’s popular PLAY:1 speaker, still providing rich room-filling sound, which we can confirm in our recent review of the speaker.

You can buy the Sonos One in black or white, available for $249 CAD on Amazon.ca.

WhatsApp has finally introduced a new feature that makes it easier to message yourself, by allowing you to send notes, reminders, and shopping lists to yourself for easy access (via TechCrunch). The feature called ‘Message Yourself’ is set to reach all iPhone and Android users in the coming weeks. The feature was previously being tested by select beta users,...
Usman Qureshi
3 mins ago

Apple has shared a handy new tutorial on its YouTube support channel, detailing how iOS 16 lets you use a Memoji sticker as your profile picture in Contacts. You can easily create a Memoji in iOS to match your personality and mood, and then send it in Messages and FaceTime. With a compatible iPhone or iPad...
Usman Qureshi
17 mins ago

In a series of tweets posted today, Twitter CEO Elon Musk has accused Apple of hating free speech in America as the company has seemingly stopped advertising on the platform. "Apple has mostly stopped advertising on Twitter. Do they hate free speech in America?,” Musk tweeted. He followed up with another tweet mentioning Apple CEO...
Usman Qureshi
27 mins ago