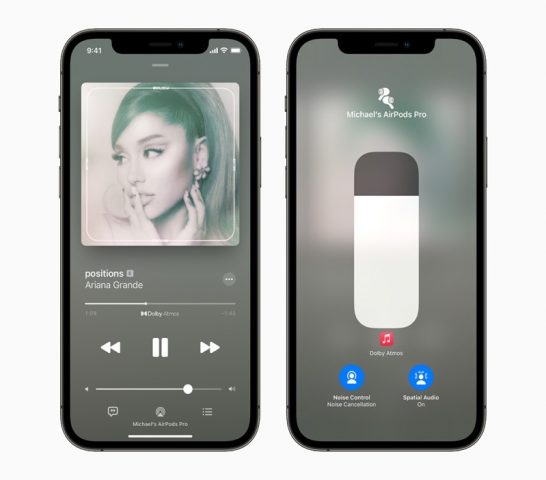 Spatial Audio was announced with iOS 14 last year as a feature to bring more immersive sound to AirPods Pro users (and now AirPods Max as well). It uses sound recorded with Dolby technology to simulate 360-degree audio with a surround experience, which moves in the headphones as the user moves their head.

Discovered by a Reddit user in the iOS 15 beta, the feature takes a regular stereo audio mix and place sit in a virtual spatial environment around the listener:

I’ve been testing Apple Music’s Dolby Atmos support and I just discovered a toggle in Control Center’s volume slider for non-Atmos-supported tracks. It’s called “Spatialize Stereo” and it does pretty much exactly what you’d guess. It takes a stereo audio mix and places it in a virtual spatial audio environment around you.

The only instance I’ve seen of something like this before was when watching non-Atmos content in the TV app with spatial audio on. I remember trying to mess with settings to get music to play with the same treatment to no avail.

While the feature certainly won’t be nearly as good as the current three-dimensional sound experience that Dolby-rated audio offers, but it does a great job simulating audio coming from different directions, notes the Redditor.

“The greatest thing about this is that it supports EVERY audio track,” writes the Redditor. “Sure I’d pick Atmos Spatial Audio mixes over Spatialized Stereo every time, but for the moment there are only a dozen or so options for Atmos available on Apple Music, so this is such an amazing feature to have!”

To enable Spatialize Stereo in iOS 15 and iPadOS 15, users need to connect their AirPods Pro or AirPods Max devices and play any song. Then, users will need to go to the Control Center, press and hold the volume slider, and the new option will appear. The feature also works in macOS Monterey.