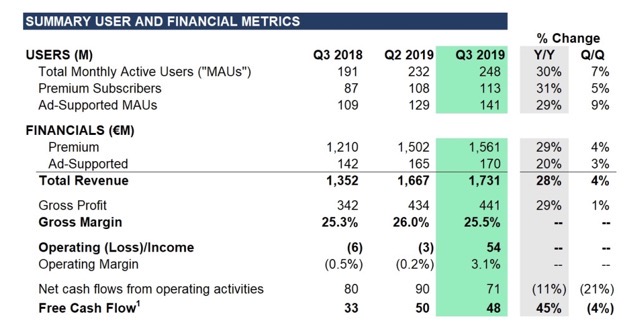 “Relative to Apple, the publicly available data shows that we are adding roughly twice as many subscribers per month as they are,” Spotify noted in its report.

“We continue to see exponential growth in podcast hours streamed (up approximately 39% Q/Q) and early indications that podcast engagement is driving a virtuous cycle of increased overall engagement and significantly increased conversion of free to paid users. The correlations in our data sets are clearly apparent. We are working to prove causality. Overall, the business is performing strongly.”

Spotify also announces that its chief financial officer (CFO) Barry McCarthy will be leaving the company in January after nearly five years, with Paul Vogel taking over.