Aftermarket warranty SquareTrade, is back at it again with more iPhone torture tests, this time putting the iPhone 7 and iPhone 7 Plus front and centre (and throwing in the Note 7 for good measure), in its calculated tests.

Last fall, SquareTrade said Apple reinforced its iPhones to solve its “bend” problem, and this year’s iPhone 7 and iPhone 7 Plus bend at the same amount of force, at 170 and 180 pounds, respectively. The Samsung Galaxy Note 7 bent at 180 pounds as well, but cracked and was rendered unusable, unlike the iPhone 7 models.

As for the tumble test, after 30 seconds, the iPhone 7 camera lens cracked liked its predecessor, but the iPhone 7 Plus fared better than the 6s Plus. The Note 7 suffered the most damage, not only cracks on all four corners, but its back glass as well.

When it came to sidewalk drop tests, the iPhone 7, iPhone 7 Plus and Note 7 all suffered shattered screens, so we still have a ways to go when it comes to front glass technology. 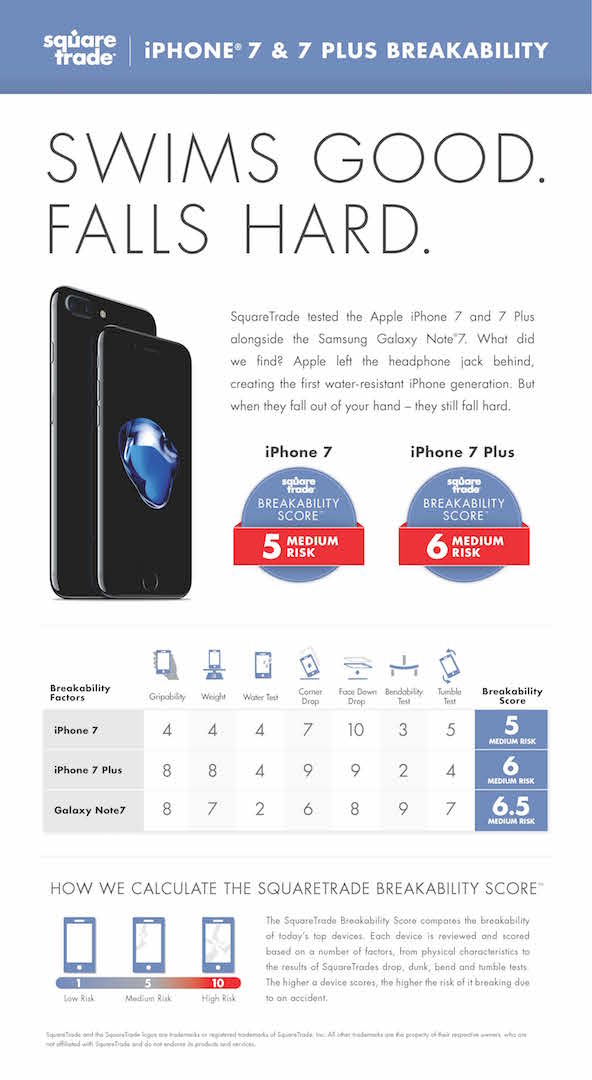 “The iPhone 7 generation is the first to compete with Samsung’s water resistant ratings in its latest smartphones,” said Steve Abernethy, executive chairman at SquareTrade. “After putting them to the test, there’s no doubt the iPhone 7 and 7 Plus aren’t scared of going for a little swim. Still, when it comes to surviving a sidewalk drop, we saw no improvement. Broken screens are still the leading cause of smartphone damage—and both Apple and Samsung still have a lot of work to do.”