Last week Starbucks Canada announced their Mobile Order & Pay system would debut in the Greater Toronto Area on October 13, and that magical day has arrived.

The Starbucks iPhone app was updated last night to bring support for Mobile Order & Pay, which allows customers to order in advance and pay for their food and beverages right from their smartphone. Customers than can bypass lines when picking up their orders in-store.

For now, the system is only available in the Greater Toronto Area, along with Markham, Scarborough, Richmond Hill, Unionville, Vaughan, Etobicoke, Aurora and Thornhill, at “participating” corporate-owned Starbucks locations. We asked for an exhaustive list of participating stores, but the company declined to provide lists of all locations (however if you want us to confirm a location, ask away).

Version 3.3.2 of the Starbucks iPhone app also brings back the Menu, available in the Canadian English version of the app, this time full of tantalizing images. The return of this feature makes sense as it will help drive further Mobile Order & Pay transactions.

The app also asks to use your device’s location at all times, to support Mobile Order & Pay features (the app warns continuous GPS usage will have an impact on your device’s battery life).

We also noticed the Pay screen has been tweaked, now listing coupon offers directly on the screen, along with an even clearer indication of your Starbucks Card balance. For your cards setup with auto reload, a new visual “A” icon sits beside the card number. 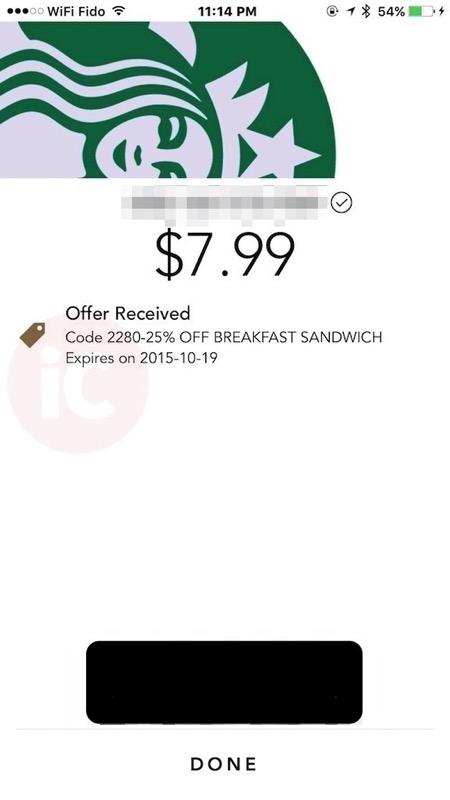 Let us know if you try Mobile Order & Pay (instructions here) this morning and how it felt to bypass the lines!