Instead of earning 1 Star per visit today, you’ll soon be earning 2 Stars per every $1 spent in-store, a move which looks to get customers spend more at retail locations. 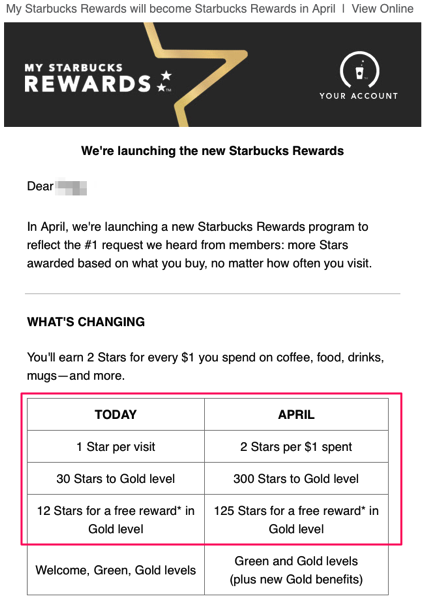 When the transition comes, Johnston says “We’ll take care of everything. All the Stars in your account will multiply to reflect the change once we launch the new program in April. The benefits you currently enjoy will stay the same, and we’ll introduce new benefits when we launch.”

Starbucks says this is the “#1 request” by customers and it will “soon be a reality” on their My Starbucks Idea page. Customers seem upset at this change, as they have vented in the comments there, with some noting they will “no longer be a Starbucks customer when April 2016 arrives.”

If you’re not keen on the program’s change, and no longer want to participate, it means just another place to use Apple Pay versus the Starbucks iOS app for payments, since it’s going to take more visits to earn a free reward, if you’re a light spender. But for heavy spenders, it won’t matter as you’ll earn rewards faster. Just buy more food items at Starbucks, right?!

Let us know what you think of these changes coming to the Starbucks Rewards program.