Last night, Eddy Cue, Apple’s senior vice president of Internet Software and Services, accepted a Special Merit Grammy Award for Steve Jobs awarded in honor of his outstanding contributions to the field of music with the iPod and iTunes Music Store (via MacRumors). The Recording Academy had already announced that it would be honoring Steve Jobs with a Trustees Award at the 2012 Grammys. 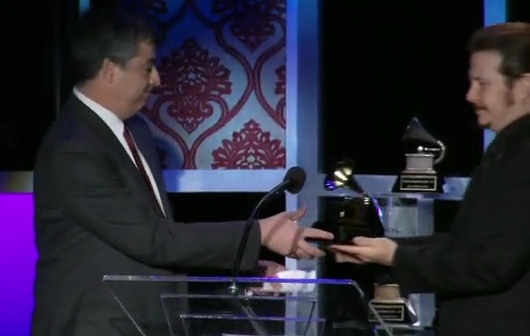 Steve’s Grammy marks the second time he and Apple have been honored by The Recording Academy. Apple itself won a Technical Grammy Award in 2002.

On behalf of Steve’s wife, Laurene, his children, and everyone at Apple, I’d like to thank you for honoring Steve with the Trustees Grammy Award. Steve was a visionary, a mentor, and a very close friend. I had the incredible honor of working with him for the last fifteen years.

Accepting this award means so much to me because music meant so much to him. He told us that music shaped his life…it made him who he was. Everyone that knows Steve knows the profound impact that artists like Bob Dylan and The Beatles had on him.

Steve was focused on bringing music to everyone in innovative ways. We talked about it every single day. When he introduced the iPod in 2001, people asked “Why is Apple making a music player?” His answer was simple: “We love music, and it’s always good to do something you love.”

His family and I know that this Grammy would have been very special to him, so I thank you for honoring him today.

Head over to this link to watch a clip from last night as Eddy Cue accepts the Grammy on Steve’s behalf.