That Time Steve Jobs Told Kevin O’Leary “You Are Nothing”

Kevin O’Leary made headlines yesterday when he announced his entry into the federal Conservative Party leadership race. The Canadian shot to fame with his appearances on CBC’s Dragon’s Den and Shark Tank in the U.S.

There was a time when O’Leary met Apple co-founder Steve Jobs, to discuss the Mac software market in the late 1990s. O’Leary’s company, The Learning Company, at the time, held 80 per cent of the education software market. According to O’Leary, it cost $500,000 per title to develop for either Windows or Mac, and economics didn’t make sense to keep making software for the latter, since the former had 97 per cent of the PC market.

So O’Leary was able to setup a meeting with Jobs and flew down to Cupertino, to justify what he claimed was his software company losing $50 million per year to acquire Mac customers.

Here’s a snippet of how O’Leary explained the beginning of the meeting, written in Maclean’s in 2011:

We were working closely with teams at Apple and I finally said, “I’ve got to go see the big guy. We can’t go on like this.” I planned to ask him for $50 million, but was willing to accept $12 million [to continue making software for Mac]. I got there and sat down at a boardroom table; there were five or six of us on each side. It started with the pleasantries of the product management teams and then probably half an hour into it, Jobs walked in and the whole room shut down. It went silent. Nobody would say anything when Steve was in the room. He was the king.

I opened with some pleasantries. Talked about the weather and he said, “Look, I don’t have time for anything else. What’s on the agenda?”

“I can’t live with this loss of share,” I said. “Your strategy isn’t working.” He’s under tremendous pressure from his board at this time, unbeknownst to me, for the same reason. He said, “What do you want?”

“I want you to give me $50 million to pay to keep my brand in the market supporting your hardware.”

He looked at me for 10 seconds—a very uncomfortable pause. And then he went absolutely nuts. He berated me: “The aura of the Apple brand is worth $50 million to you. You are nothing. Your brand is nothing compared to my brand.” I said, “Excuse me, Steve, I own 80 per cent of the market. I am the educational market. You need me more than I need you.”

The story was told to Maclean’s, to promote O’Leary’s new book at the time. But in a different interview with WatchMojo, O’Leary explains the same story but noted he asked for $54 million and said his team only consisted of two people including himself, instead of 5-6 per side, contradicting himself. 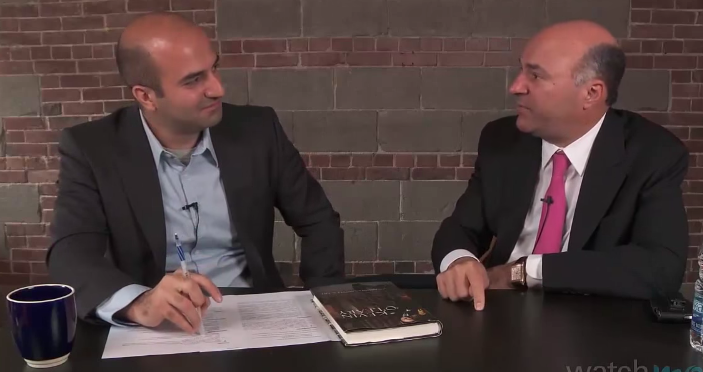 Check it the clip below, where O’Leary said Jobs was the “toughest bastard” ever:

Earlier this week, we noted how Prime Minister Justin Trudeau was sporting an Apple Watch on his nationwide town hall tour.