Surface Your Past and Upcoming Bills with New Google iOS App 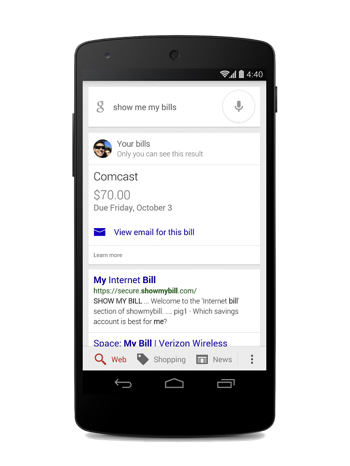 Previously known as Google Search, the updated “Google” apps for iOS and Android have introduced support for surfacing past and upcoming bills. So if a user has a payment due date and amount in his Gmail account, the Google mobile app can now find it (via VentureBeat). The new feature will allow users to quickly check whether they’ve paid their bills or just needs to determine the exact amount they owe.

“In case you weren’t getting your bills sent to your inbox, this is naturally an incentive to sign up for email notifications with your Gmail account, which is of course exactly what Google wants. While today’s feature release is still technically a search function, it has nothing to do with querying the Web — and as we know, Google’s bread and butter is searching the Web and displaying ads.”

Ever since the release of Google Now, the company has been transforming its main app into an all-in-one tool. The new feature however is currently only available on mobile, and Google hasn’t indicated if it plans to roll out the same functionality to Google.com or any of its other apps.

Do you find the new feature beneficial or you think it’s just another one of Google’s ‘peaks’ into your personal data?

Even though Sony's first VR headset took 8 months to sell a million units, the company is betting big on its next-generation PlayStation VR2 headset with an increased production plan, according to Bloomberg. Citing people familiar with the matter, the publication notes that Sony is planning to make 2 million units of the PlayStation VR2...
Usman Qureshi
17 mins ago

As reported by 9to5Google, Google’s new wired Nest Doorbell which appeared in the Google Home app last month has been leaked early in stores with availability expected later this week. The new Nest Doorbell was spotted in a Best Buy store, with the packaging saying “2nd generation” and “Wired” with a check mark, in white and dark...
Usman Qureshi
34 mins ago