In order to gain a better understanding of the ecosystem, InMobi has surveyed more than 1000 developers across the globe, asking them about preferred platforms, revenues and revenue models, motivations, challenges, and so forth. Here is what they have found.

The app developers are young, with 46% of them being aged between 25 and 34; and male, as only 6% of them described themselves as female. Almost three-quarters of the surveyed developers have been in the industry for less than three years.

As you may have already guessed, when opening the app store, the majority of them are focused on games (41%) and entertainment (31%), while utilities got 27%, and education and reference, 21%.

Google Play seems to be the preferred platform for development, due to easier access to testing barriers. According to InMobi, 86% of developers opt for Google Play, 57% for iOS. Windows Mobile is chosen by 21%.

Another interesting highlight of the survey is the rise in Swift’s popularity. While Java is the preferred programming language, 45% of developers use HTML5 technologies, and 18% use Swift, a remarkable sign considering that it is a new language. 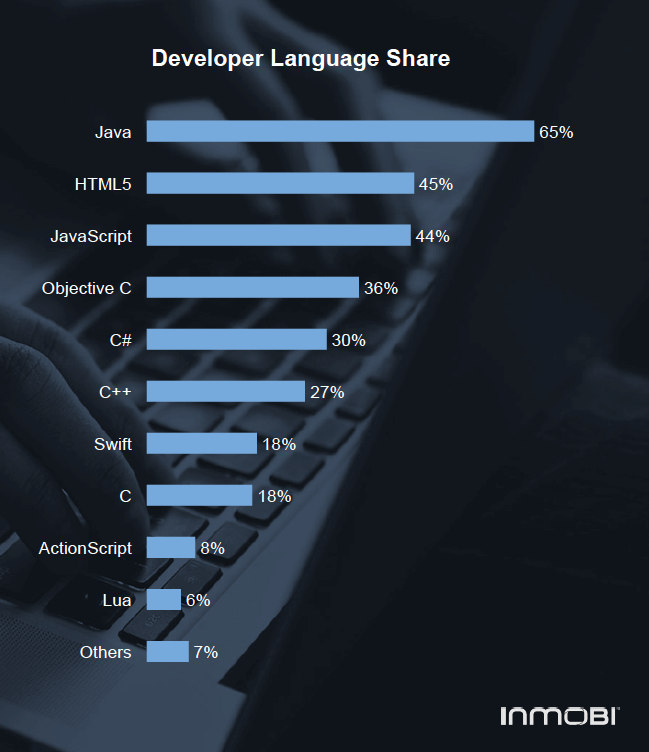 In terms of monetary insights, here is what InMobi has found: 55% of developers make $1000 per month; monthly average mobile app revenue globally is under $6K. The size of development teams does affect app revenue: While independent devs show an average of 1.5k, this jumps to 7.5k for medium-sized studios, and to $44.0k for large studios.

You can download and crunch the full report by following this link. But before jumping to quick conclusions, keep in mind that this survey was done online and on-device, so it does not apply to the whole dev community.