A new report from IHS iSuppli ‘estimates’ the 16GB iPhone 4S costs $196 USD to produce, based on their teardown analysis. The bill of materials (BOM) for the 16GB model is $188, but with an $8 manufacturing cost, the total comes $196.

The 32GB and 64GB models are estimated to cost $215 and $254 to produce. IHS iSuppli notes the iPhone 4S debuts NAND flash memory from the South Korea company Hynix Semiconductor Inc., a move away from Samsung memory. Although the A5 chip was manufactured by Samsung as revealed by die markings. Toshiba memory was also found in other iPhone 4S samples as well.

This is made possible thanks to a converged power amplifier module (PAM) from second-tier supplier, Avago:

A PAM is a device that amplifies a radio signal prior to transmission. What makes the converged Avago part unique is its capability to support both 2G and 3G cellular technologies across multiple bands thus reducing the number of components and PC board footprint required. While Avago is by no means the only company supplying these types of devices, it is the first to be implemented by Apple.

The CDMA iPhone Qualcomm Chip Resides Within the iPhone 4S

One baseband chip inside the iPhone 4S, instead of two:

“While the Qualcomm MDM6600 was in the CDMA version of the iPhone 4, the Intel (formerly Infineon Technologies AG) PMB9801 was used in the HSPA model. In the iPhone 4S, Qualcomm no longer has to share the iPhone 4 baseband design win with Intel. It will be interesting to see how Intel responds in terms of winning back this socket in the next design cycle.”

OmniVision the Second Source for the New 8MP Camera?

A previous teardown and infrared microscope used by Chipworks revealed Sony sensors were used in the iPhone 4S camera, but IHS notes OmniVision could be a second source for camera units as well.

These prices are of course estimates:

Please note that these teardown assessments are preliminary in nature, and account only for hardware costs and do not include other expenses such as software, licensing, royalties or other expenditures.

Regardless, Apple continues to experience unrivalled success with the iPhone 4S, as sales exceeded 4 million units in its opening weekend. 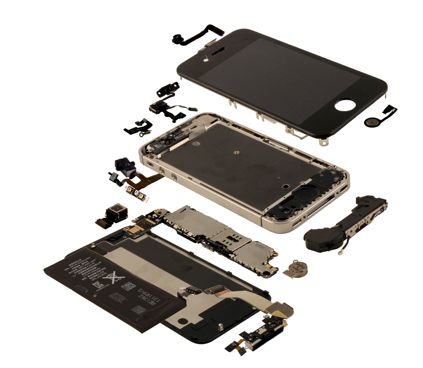