Earlier this year in April, Apple product designer and Siri co-founder Tom Gruber gave a TED Talk, during which he spoke about his vision of the future of computers and artificial intelligence. 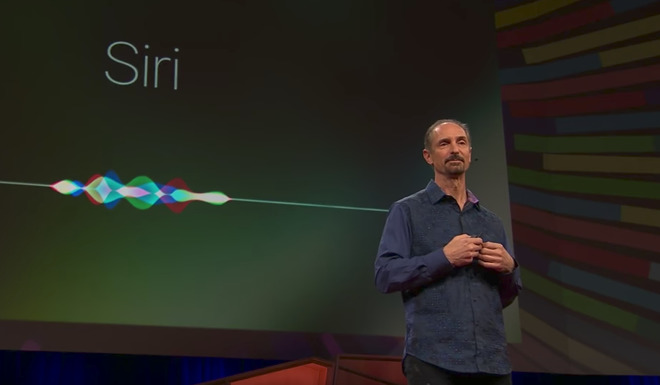 The video of the onstage presentation has now been released online, and it gives us a better glimpse into the future Gruber imagines. His talk focuses on what he calls “humanistic AI,” the belief that when machines get smarter, so will we.

“As machines get smarter, we get smarter. I call this ‘humanistic AI’ – artificial intelligence designed to meet human needs by collaborating and augmenting people.” Siri was designed as a humanistic AI, according to Gruber, to “augment people with a conversational interface that made it possible for them to use mobile computing, regardless of who they were and their abilities.”

Gruber’s first example of such a use is in a man called Daniel, who is blind and quadriplegic. Daniel relies on Siri to manage his calls, text messages, and emails, without the assistance of his caregivers. “Here’s the man whose relationship with AI helps him have relationships with genuine human beings. And this is humanistic AI,” says Gruber.

During the rest of his TED presentation, Gruber continues with more examples of the benefits of human and machine intelligence collaborations, showing improvements in cancer detection, engineering, and even human memory. Gruber believes that AI will benefit all of us in some manner.

Gruber is clear to point out that the usage of AI to improve human memory must be kept private and secure. “In my view, a personal memory is a private memory,” he shares. “We get to choose what is and is not recalled and retained. It’s absolutely essential that this be kept very secure.”

Check out the entire presentation below.