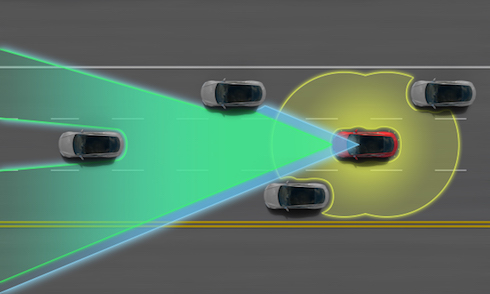 A newly published video of Tesla’s Autopilot 8.0 software in action shows how the system helps avoid a crash, by employing radar tech to see around objects that would block a human driver’s field of vision (via TechCrunch). Tesla’s Forward Collision Warning system sounds before you can even see the car immediately in front of the driver’s Tesla Model X braking.

“It seems to have sensed the SUV in front of that vehicle coming to a sudden stop, which the smaller vehicle which ends up rear-ended it did not notice in time.

This looks like it could’ve been a prime candidate for a pileup, including the Model X that captured the video, but instead as the dashcam footage shows, the vehicle not only alerted the driver about the potential collision but even started applying its emergency braking system before he himself could react and do so”.

The result, as you will see in the following video, is that the Model X stops well back of the collision. Check it out:

Original video, authorisation from the owner. Essential, no one could predict the accident but the radar did and acted by emergency braking. pic.twitter.com/70MySRiHGR