A new study has revealed the most anticipated electric vehicles of 2022.

As the year go on, electric vehicles are becoming more popular among drivers and more seen driving on roads than ever before.

Now, Lease Fetcher, a British long-term rental specialist, carried out an investigation to find out the most anticipated EVs, using Google search volume as it’s source.

“Here at Lease Fetcher, we were eager to see which currently available electric cars have proven most popular over 2021, and which ones everyone is looking forward to most in 2022 and beyond… We looked at search volume data for electric cars across 168 countries.” 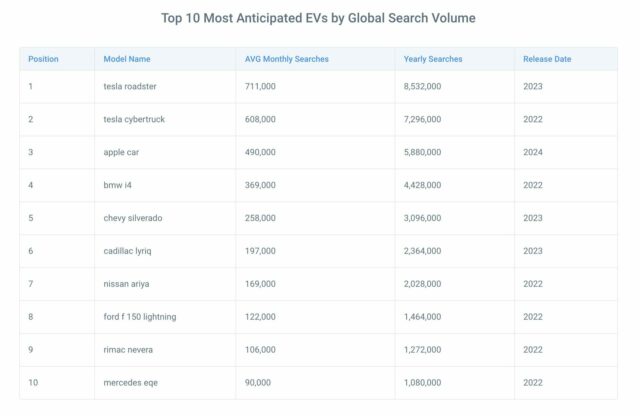 While the car rental firm doesn’t believe the vehicle will be the most ubiqitous EV on the road, the Tesla Cybertruck ranks as the second most anticipated car model on a global scale, as it was searched 7,296,000 times.

The Apple Car, BMW i4 and the Chevy Silverado make up the remainder of the top 5 most anticipated model list. The rest of the top 10 is composed of the Cadillac Lyriq, Nissan Ariya, Ford F150 Lightning, Rimac Nevera, and Mercedes EQE, in that order.