The Kid From Victoria Hired by Apple At Age 14 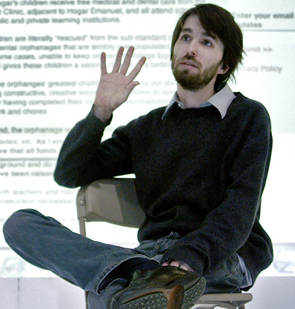 Now here’s a story about a Canadian kid that’s inspiring. If you haven’t heard the story behind Tom Williams, you should. Hailing from Victoria, BC, he was hired by Apple at the age of 14. How did he get there? His story was posted on Derek Sivers’ website a couple years back, but I recently found out it about it via TUAW.

I read John Sculley’s biography, who was Apple’s CEO at the time, and my hero. As other kids had sports stars or actors, he was my hero. I wanted to be him or be like him.

So I started calling Apple in the 7th grade. Every single morning, at about 8:00 am before I went to school, I would call up the main Apple switchboard number, and ask for John Sculley’s office, and they would put me to his assistant.

Every single morning I’d be talking to Jerry, his assistant, and would start for the first few weeks with just my standard pitch. I was taking the business development angle. I’m the CEO of my own company, which was called Desert Island Software, and he’s the CEO of his company. Let’s have two CEOs talk to each other about how we can work together.

For the first few weeks I’m sure Jerry thought that it was some kind of a prank or weirdo. Eventually I started to be less reliant on the pitch and say, “Hi, Jerry, how are you?” This is the gatekeeper to somebody that is receiving a lot of unsolicited phone calls. I think instinctively I realized that by building a relationship with Jerry, I was building a relationship with the gatekeeper. If they like you and support you, that’s really helpful.

Here I was, literally for about a year and a half, calling every single morning. The relationship obviously evolved to “Hey Jerry, what’s going on with you?” and “Oh, you know, school’s tough this week Tom‚” blah blah blah.

Eventually, Tom got through and Apple gave him a free ticket to WWDC. I’ll let you read the rest. Check it out here.