TikTok has today announced it will be partnering with the OSHEAGA Music and Arts Festival for a second year, returning as the festival’s exclusive live streaming partner. 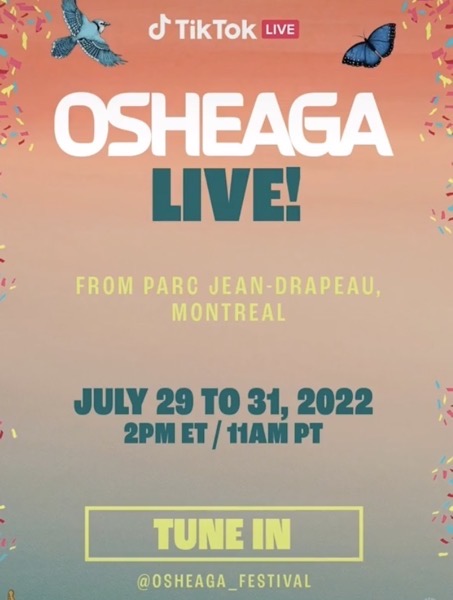 OSHEAGA celebrates its 15th anniversary this summer, bringing an unparalleled lineup to Montreal’s Parc Jean-Drapeau. The event will help showcase artists from around the world, including global superstars and emerging talent.

TikTok’s partnership brings access to this world-class music festival, straight from the Montreal stages to the homes of music fans across Canada and around the world.

“We’re partnering with OSHEAGA again to make sure our global community doesn’t miss a moment by streaming over 24 hours of the festival’s performances exclusively on TikTok, between July 29-31.”

“We are thrilled to partner with TikTok for this exclusive livestreaming of OSHEAGA for a second year. Working together will allow us to present OSHEAGA to millions of people around the globe and to promote Montreal as one of the premier festival cities in the world!” – Nick Farkas, Founder of OSHEAGA.

The exclusive LIVE performances will be hosted on the OSHEAGA TikTok profile, @osheaga_festival, for free.

We are pleased to announced that @6LACK & @lunaliband are joining our OSHEAGA 2022 lineup! pic.twitter.com/BB3Z3Lw6nB

Day 1 of the livestreams will kick off at 2pm EST on July 29 and continue throughout the weekend until the festival concludes on July 31. The full streaming schedule will be released soon.

Sony has launched its 'PlayStation Games for PC' website. Not" surprising by the name, the site gives an overview of the first and second-party titles currently available to play on PC via Steam and Epic Games Store. As Sony continues its investment in the PC space, porting many of its own games over, the company...
Steve Vegvari
2 hours ago

Back in July, Netflix announced it had picked Microsoft to power its upcoming ad-supported tier. This discounted tier would make up for its cheaper price by showing ads within shows and movies within the streaming service. Now, it appears this ‘Netflix with Ads’ tier will lack a major feature of regular subscriptions: offline downloads. According...
Gary Ng
15 hours ago