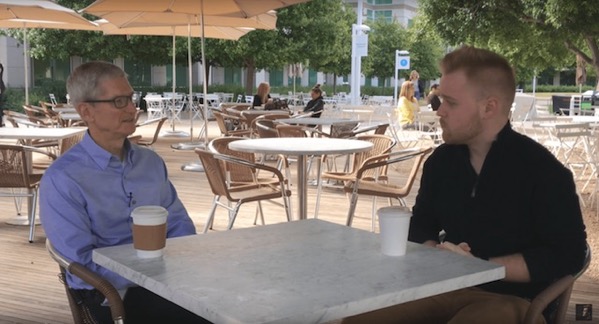 To mark the Global Accessibility Awareness Day (GAAD), Apple CEO Tim Cook spoke about accessibility in an exclusive interview with James Rath, a young filmmaker who was born legally blind and caught Apple’s attention last year for creating a video about the impact Apple products have had on his life.

Cook talked about the importance of accessibility with Rath and two other YouTubers, Rikki Poynter and Tatiana Lee, in the courtyard at Apple’s Infinite Loop campus. Cook and Poynter, who is deaf, discussed closed captioning and how accessibility is a core value at Apple. Lee talked to Cook about the Apple Watch and its ability to track wheelchair use.

The interviews follow the release of a series of videos made by Apple highlighting the accessibility features of its products. Check out the interviews below (via MacStories):

1Password developers have just shared a preview of all the new features and improvements coming in their next major update, especially for iOS users. Reorder fields and sections inside items One of the biggest improvements in the forthcoming 1Password 8 update will be the ability to reorder fields and sections within items. "Just edit the item,...
Usman Qureshi
11 mins ago

Apple analyst Ming-Chi Kuo has today claimed in a series of tweets that only the highest-end 'iPhone 16 series’ model will feature a periscope camera lens next year. Earlier this month, a report by The Elec noted that the new periscope camera lens expected to debut this year exclusively in the iPhone 15 Pro Max will...
Usman Qureshi
36 mins ago

Instagram co-founders Kevin Systrom and Mike Krieger are making a return with a brand new project called ‘Artifact,' a personalized news feed driven by artificial intelligence. As noted by the Platformer, the app uses machine learning to understand your interests and will soon let you discuss those articles with friends. The company plans to let users in...
Usman Qureshi
56 mins ago