Join Tim Cook for Lunch in this CharityBuzz Auction Worth $100,000 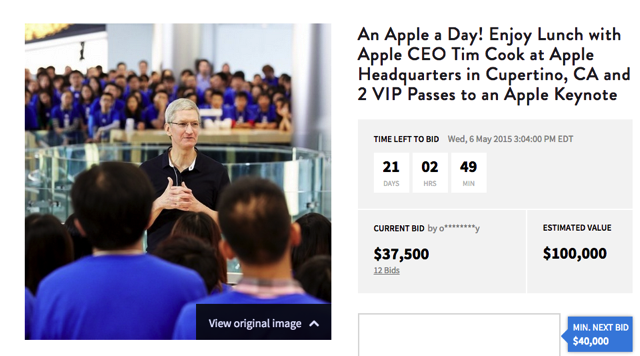 Having already undertaken two years’ worth of successful charity actions, Apple CEO Tim Cook has joined CharityBuzz once again. This year Cook will help raise money by taking the lucky winners to lunch at Apple headquarters in Cupertino. You can read the description below:

Bid now on this opportunity to have lunch with Apple CEO Tim Cook on campus in Cupertino, California, and to be his guest at an Apple keynote event!

Tim was recently ranked #1 on Fortune magazine’s 2015 list of the World’s Greatest Leaders, and in 2014 he was named Person of the Year by the Financial Times.

Join me for lunch (and a keynote!) and help a great cause. @RFKHumanRights is working toward a more just world. https://t.co/QxaKne4itb

As previously, the auction offers 2 people the chance to enjoy the company of Tim Cook for an hour. There is an extra bonus this year though: this time around the winning pair will be the lucky recipients of 2 VIP passes to an Apple keynote.

Last year, the charity auction price, in support for the RFK Center for Justice and Human Rights, reached $180,000. The year before that the auction was for a coffee date, with the bidding ending up at over $600,000.