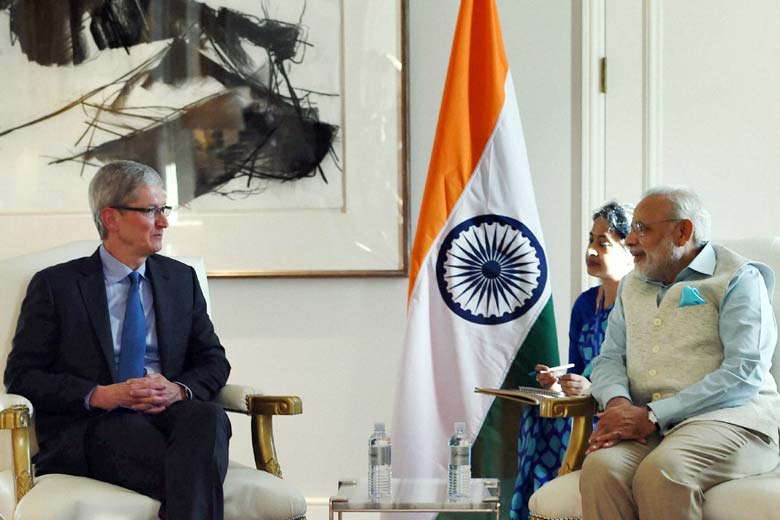 “The Prime Minister (in his meeting with Cook) said he would like Apple to start manufacturing in India. He mentioned the huge opportunities India offered,” Ministry of external affairs spokesman Vikas Swarup told reporters.
“Cook responded positively. I think India does fits into his long term plans. He particularly was interested in the whole App development economy, which he said could be a very very important factor for entrepreneurship where individual app developers can just become part of the app universe,” he said. “Cook said by using the app development tools people can really become part of this huge industry. He gave the example of China where in fact we created 1.5 million jobs,” he said.

Besides the invite to India, the two have discussed Apple Pay and how this can be part of Jan Dhan Yojana and other such initiatives. Apple said India has a special place in the heart of every company employee, because its co-founder, Steve Jobs, went to India when he was young and what he saw inspired him to start Apple.

Tim Cook also said that it would like to partner with Modi’s Digital India initiative, calling it initiative and a game changer.

Amazon has revealed its offering of free games arriving for Prime Gaming members. This month, subscribers can gain access to eight titles and new in-game content to a series of ongoing games. December sees Amazon host one final month of free games for the year. Closing out 2022, Prime members can redeem and play Quake,...
Steve Vegvari
36 mins ago