In a sit down with Robin Roberts on ABC’s Good Morning America, Apple CEO Tim Cook talked about the launch of iOS 11, the iPhone 8, the iPhone X, Face ID, ARKit, and the legacy of Steve Jobs. “This is a day to remember,” Cook said, “This is a profound day”. He highlighted that iOS 11 includes AR capabilities, offering the technology to all Apple users with an iPhone 6S or later. “In one day, we can make AR available for hundreds of millions of people”. 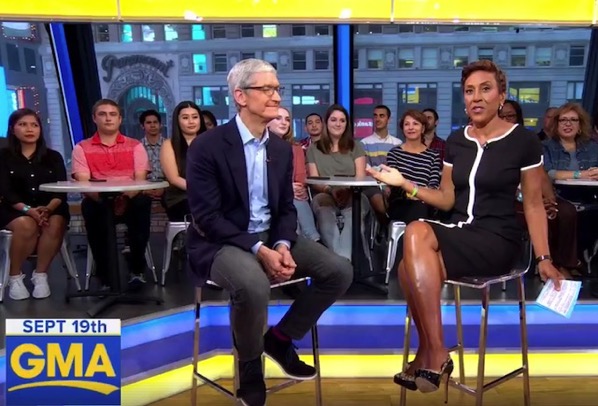 When asked about the controversy surrounding Face ID on social media, Cook denied any risk of Face ID violating the user’s privacy, saying that all processing and image capture stays on the phone and is never sent to Apple. “We’re about your privacy. We want to protect your data, because we know its yours, not ours”.

Roberts also asked Cook about the eradication of the home button, to which he replied that users would likely benefit more from a larger screen than keeping the home button in November’s iPhone X. “We think that having an edge-to-edge display such that the whole phone is a display will be loved even more”.

Check out the video embed below for the exclusive interview:

Apple earlier this month unveiled Apple Watch Ultra, the tech giant's highest-end smartwatch to date. The premium smartwatch carries a starting price of $1,099 and is geared towards extreme athletes and adventurers. Apple Watch Ultra is designed to be the perfect companion for when you're far away from civilization, whether you're below sea level or...
Nehal Malik
5 mins ago