Apple CEO Tim Cook shared his disappointment with President Trump’s decision to withdraw the U.S. from the Paris Agreement on climate change, calling the move “wrong for our planet” on Twitter. Cook went on to say “Apple is committed to fight climate change and we will never waiver.” 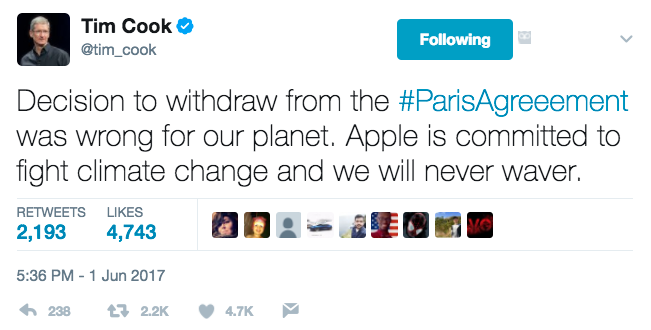 In a further memo to employees shared by BuzzFeed, Cook explained he tried to “persuade” President Trump on Tuesday to keep the U.S. within the Paris Agreement, but “it wasn’t enough”. The landmark Paris Agreement saw 190 nations agree to reduce greenhouse gases, struck in 2015; the agreement kicked into effect for the U.S. in November 2016.

Here is a snippet of Cook’s memo to employees:

Climate change is real and we all share a responsibility to fight it. I want to reassure you that today’s developments will have no impact on Apple’s efforts to protect the environment. We power nearly all of our operations with renewable energy, which we believe is an example of something that’s good for our planet and makes good business sense as well.

We will keep working toward the ambitious goals of a closed-loop supply chain, and to eventually stop mining new materials altogether. Of course, we’re going to keep working with our suppliers to help them do more to power their businesses with clean energy. And we will keep challenging ourselves to do even more. Knowing the good work that we and countless others around the world are doing, there are plenty of reasons to be optimistic about our planet’s future.

Other tech leaders in Silicon Valley also reacted to the decision by Trump. Tesla CEO Elon Musk said this afternoon he is “departing presidential councils. Climate change is real. Leaving Paris is not good for America or the world.”

Prime Minister Justin Trudeau reacted to the Trump decision this afternoon, by saying “We are deeply disappointed that the United States federal government has decided to withdraw from the Paris Agreement.” He added “Canada is unwavering in our commitment to fight climate change and support clean economic growth.”