Tim Cook Responded to My Email and Will to Yours Too

Ever since Tim Cook took over the reigns as Apple CEO, it appears he’s been responding to emails from Apple supporters personally. I put this to the test by firing off an email to Tim a couple days ago and he responded two hours later. Check it out below: 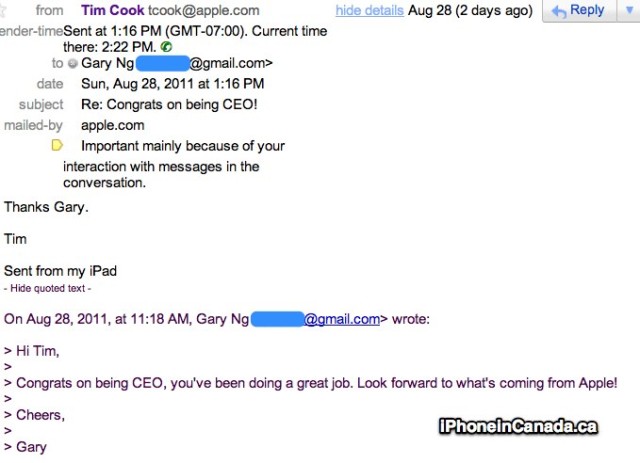 Tim most likely has someone responding on his behalf, as I can only imagine the sheer number of emails he receives. Looks like he’s following in the footsteps of Steve Jobs, with his infamous email replies.

Send Tim an email to tcook@apple.com, and I’m pretty sure you’ll get a response too.

As noted by the folks over at MacRumors, the latest iOS 16.1 update brings live sports scores and other real-time activities to iPhone 14 Pro’s Dynamic Island. For those who haven’t upgraded to iOS 16.1 yet, it introduces a new Live Activities feature that allows iPhone users to keep tabs on are happening in real-time,...
Usman Qureshi
3 mins ago

India is pushing smartphone manufacturers to support its proprietary navigation system, Navigation with Indian Constellation (NavIC), on all new smartphones sold in the region by January 2023. However, Apple and other smartphone makers are concerned about the added cost and components of making the change — reports Reuters. NavIC is India's own alternative to the widely...
Nehal Malik
4 mins ago

Netflix has announced it will be making its own ‘world class’ games studio, to be established in Helsinki, Finland, led by Marko Lastikka as the studio director. Amir Rahimi, VP of Game Studios, Netflix, said on Monday this move “is another step in our vision to build a world-class games studio that will bring a variety […]
Gary Ng
57 mins ago