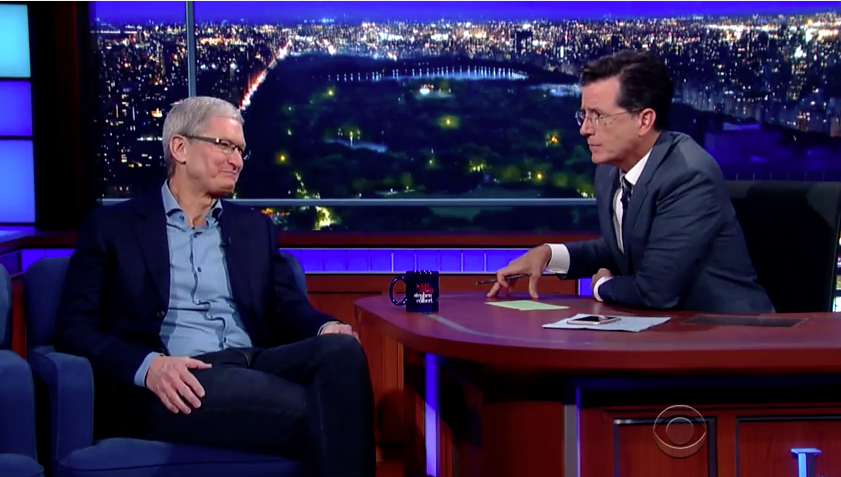 Of course, Colbert couldn’t resist making a joke about 3D Touch: “If I hang up on someone hard enough, will it actually hit them on the other side?”
As two Steve Jobs movies have been released this year (well, the second one, directed by Danny Boyle, officially screens on October 9), Colbert asked Cook if he had seen either. We know Steve Wozniak did.

I haven’t seen them, but the Steve I knew was an amazing human being. He’s someone that you wanted to do your best work for. He invented things that I think other people could not. He saw things other people could not. He had the uncanny ability to see around the corner, and to describe the future, not an evolutionary future, but a revolutionary future. And he was a joy to work with. And I love him dearly and miss him every day. I think a lot of people are trying to be opportunistic and I hate this. It’s not a great part of our world.

Another topic of the interview was Tim Cook’s sexual orientation. “You came out as gay recently. Was that an upgrade, or just a feature that had not been turned on?” Colbert asked jokingly.

You can watch Tim Cook’s reply in the video inserted below, but here is a transcription, thanks to MacRumors‘ Eric Slivka.

Many people already knew, and so for many people it was no revelation. It’s like discovering something your iPhone has always done, but you didn’t quite know it, right? And so it wasn’t a revelation to a lot of people that I worked with, but it was maybe for the broader world. And I felt a tremendous responsibility to do it.

Another topic of the discussion was the Apple Car. Of course, Tim Cook kindly avoided speaking about Apple’s future plans by giving his usual comment:
“We look at a number of things along the way, and we decide to really put our energies on a few of those,” with Colbert making sure to record the response on his iPhone 6s.”

The interview ended with Siri’s responses related to Cook’s appearance – Apple added some special responses. When Colber asked Siri what he should ask Cook, Siri responded: “Do me a favor. Ask him when I’m going to get a raise.”