iPhone theft is on the rise and a recent case in Toronto resulted in a local actor being dragged alongside a car after a thief attempted to steal his iPhone.

Jeff Hanson was walking home after a Tuesday night performance around 11PM when a car pulled up next to him and asked if they could use his iPhone to call a friend for directions. When he leaned into the car that’s when the man grabbed his cellphone and put his foot on the gas. Hanson’s immediate reaction was to grab the inside of the car–that’s when things got ugly:

“I had a fight-or-flight reaction,” recalled Hanson, who grabbed onto the inside of the car as the man sped off.

“He booted right up to 60 kilometres an hour and started bobbing and weaving through cars,” he said. “It was raining, so my boots were on the ground and I was basically skiing the cement.”

The driver kept accellerating with Hanson hanging on for his life and at one point swerved around a car into oncoming traffic.

A block and half later the driver started to speed up towards a parked car–Hanson knew if he did not let go he would be pinned and “that could have been really bad.” He let go and started rolling; shortly after people rushed to his aid but the driver was already gone. Hanson suffered from a mild concussion, deep bruises and cuts to his face (20 stitches) and chest. Plastic surgeons have assured him he will recover and look normal for his future acting roles. 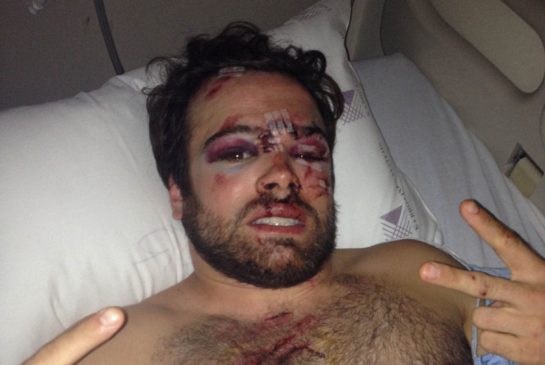 Det. Christopher Chilvers said “The victim is lucky to be alive,” and “It’s incredible what this person did just to steal an iPhone.” Turns out the suspect is wanted for stealing two other iPhones in separate incidents on May 18 from two women. The car in question is a white Dodge Charger with passenger side damage, with the suspect described in his mid-30s being white with tan skin, six feet tall, short brown hair and a British accent.

This is a pretty crazy story–Hanson is definitely lucky to be alive. Would you have grabbed onto the car or let go when the thief started to drive away?