A Toronto-based woman Catherine Tucci is claiming that an Uber driver scolded her husband for coughing in her vehicle and also charged a $76 cleaning fee. According to CityNews, the driver had modified the vehicle amid fear of catching coronavirus to create a partition separating herself from the passengers. 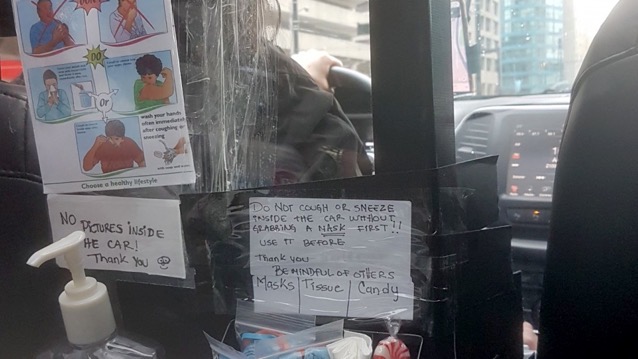 The woman told the publication that her ride was plastered with info-graphics and hand-written notes about safe coughing and sneezing protocol. The driver had also provided a hand sanitizer and surgical masks alongside a note that read: “DO NOT cough or sneeze inside the car without grabbing a mask first!!”

Tucci said neither she nor her husband is sick but believes the strong scent of air freshener in the car caused her husband to cough:

“We were heading down Yonge and my husband coughed, and that was it.”

“She started screaming. She was saying stuff like ‘you didn’t cough right,’ something about a mask.”

“Eventually I asked her to please roll up the window and again she was screaming. It was just insane. Finally, we get to Queen’s Quay, we get out, and then I get a message I’ve been charged $76 for a cleaning fee.”

Tucci says she then endured an aggravating tug-of-war with Uber to try and have the fee waived.

The driver, who didn’t want to be named, told CityNews that the man coughed numerous times splattering “snot and boogers all over my car”, which prompted her to open the windows.