The next generation iDevices will get a Touch ID upgrade this year, well-connected KGI Securities analyst Ming-Chi Kuo claimed in a note issued to investors today.

As you may already have experienced, the updated fingerprint sensor found in the iPhone 6 and 6 Plus often fails to authenticate the user – especially when the finger is too moist or greasy. The next generation fingerprint sensors, however, aim to limit the number of reading errors.

According to Kuo, Touch ID module shipments are set to grow by 12.4% this year, totalling 262 million, the note, obtained by AppleInsider, observes. The supply chain will ramp up production in the second half of the year, as expected. 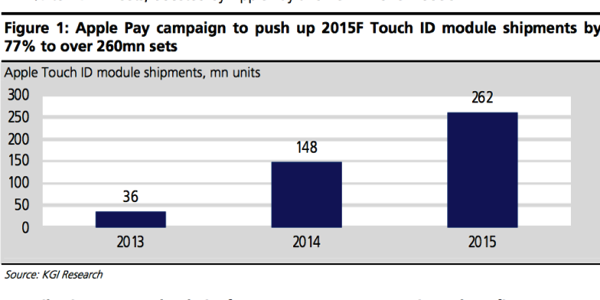 According to Kuo, the upgraded Touch ID module will “offer a better and safer Apple Pay user experience by reducing reading errors.” He expects companies in Apple’s supply chain to begin ramping up for the new Touch ID module in the second quarter of calendar 2015.

Touch ID was first introduced with the iPhone 5s in the fall of 2013. Since then Apple has included this neat hardware into the iPad Air 2 and the iPad mini 3, as well. Moreover, starting last year, it granted access to developers, allowing them to use Touch ID to unlock apps.