The rumour of Twitter expanding its 140 character limit to exclude GIFs, pictures, videos, and polls was first reported last week by The Verge, and today Twitter confirmed this by making an official announcement. 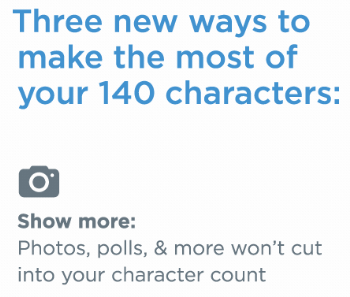 Media attachments: When you add attachments like photos, GIFs, videos, polls, or Quote Tweets, that media will no longer count as characters within your Tweet. More room for words!

Goodbye, .@: These changes will help simplify the rules around Tweets that start with a username. New Tweets that begin with a username will reach all your followers. (That means you’ll no longer have to use the ”.@” convention, which people currently use to broadcast Tweets broadly.) If you want a reply to be seen by all your followers, you will be able to Retweet it to signal that you intend for it to be viewed more broadly.

Twitter says this update to its character count will be “available over the coming months.” This means you’ll soon be able to send out a lot more media in your tweets…watch out for that media spam!