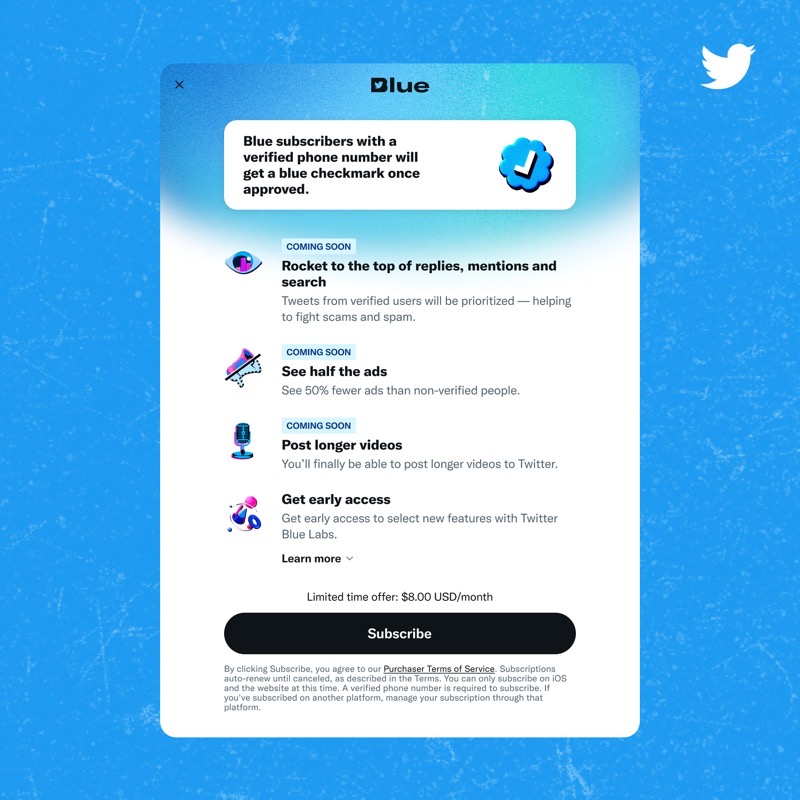 Twitter announced on Saturday afternoon it will be relaunching its Twitter Blue subscription service starting on Monday, December 12.

The pricing will be as rumoured: $8 USD/month on the web and $11 USD/month on iOS. The higher price on iOS is to offset the 30% cut from Apple.

According to Twitter, “when you subscribe you’ll get Edit Tweet, 1080p video uploads, reader mode, and a blue checkmark (after your account has been reviewed).” This is different from before, when Twitter let anyone get a blue checkmark just by paying within the iOS app.

Twitter also adds, “we’ll begin replacing that “official” label with a gold checkmark for businesses, and later in the week a grey checkmark for government and multilateral accounts,” which is new.

Also, Twitter Blue will let subscribers “change their handle, display name or profile photo, but if they do they’ll temporarily lose the blue checkmark until their account is reviewed again.” This is likely to fight spam.

“Thanks for your patience as we’ve worked to make Blue better – we’re excited and looking forward to sharing more with you soon!”, said Twitter.

Other features listed as “coming soon” include:

“Chief Twit” Elon Musk added, “and many other features to come!”.

And many other features to come!

Will you be subscribing to Twitter Blue on Monday?