Twitter Hashtag #AppleEvent Gets Custom Logo Ahead of Expected Event 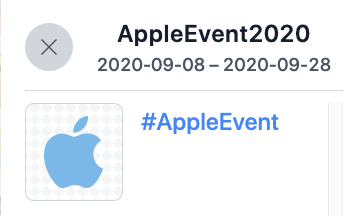 Apple has not released any new product announcements today, so it appears leaker Jon Prosser was fed incorrect information about a new Apple Watch and iPad Air.

However, there does appear to be evidence an Apple event may be happening soon, which was what Bloomberg’s Mark Gurman was hinting at for today.

My little side project is featured on the news for proving #AppleEvent is happening! 😭https://t.co/ELPe70NuBI https://t.co/XF6lQ8L4fg pic.twitter.com/z4nHmC78qw

The Twitter hashtag #AppleEvent has appeared and now has a custom blue Apple logo, according to Jane Manchun Wong’s hashflag project, which is able to tell us how long these paid custom logos are available (via MacRumors).

The #AppleEvent hashtag with custom browser is showing as being live from September 8 to September 28, 2020. It’s the most evidence we’ve seen an expected special event that may be happening soon from Apple.