Twitter has announced this morning stickers are coming to iOS and Android, set to launch “over the next few weeks.”

Soon, you can browse our rotating sets of stickers to join in on real-time conversations, and select from the library of hundreds of accessories, emoji, and props to make your photos more fun. 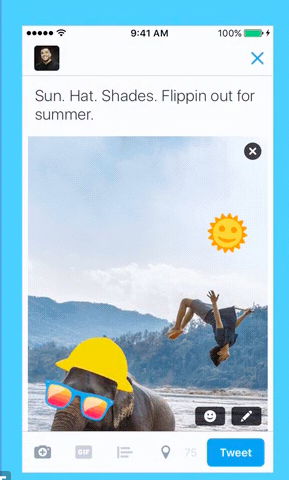 What makes these stickers interesting is you’ll be able to manipulate them and add them to photos. But also unique with this launch is stickers are searchable, in what Twitter calls “a new, visual spin on the hashtag.”

Stickers can be tapped, like a hashtag, allowing users around the world to see how others are utilizing them. Stickers will be viewable and clickable on Twitter.com as well.

Coming soon! Unleash your creativity by adding fun #Stickers to your photos on Twitter: https://t.co/Ph92Oivyhy pic.twitter.com/NZoM6nHenD

The move to add stickers joins other social networks like Facebook and Snapchat. iOS 10 will bring stickers to iMessage this fall. Stickers aren’t really new, as apps such as Line and WeChat have been using them for years, with immense popularity in Asia.

However, with Twitter’s stickers, they’re searchable, which make the move an interesting one, if you’re into finding out how people are using them. You can bet sponsors will get some stickers thrown into the mix too, another way for them to advertise like custom Twitter emoji.

Samsung and LG are gearing up to start mass production of displays for Apple's first OLED iPads, according to a report from the South Korean publication ETNews (via MacRumors). The information comes from Ross Young of Display Supply Chain Consultants, a well-known industry analyst. According to Young, both South Korean display manufacturers will produce "hybrid" panels for...
Nehal Malik
44 mins ago