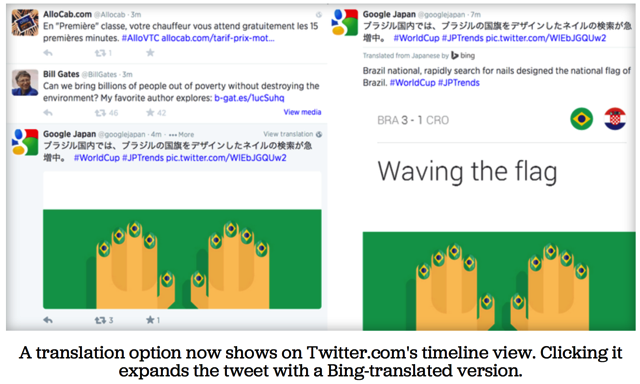 As pointed out by CNET, the official Twitter apps for iPhone and iPad have now begun showing an option to show a translated version of tweets below the native-language version, using Microsoft’s Bing translation services. Similarly, the social service has expanded the ability to show tweet translations in the Twitter.com Web interface timeline as well.

Previously, Twitter showed a translation option only for individual tweets seen through its web interface. But since it’s more common to see the tweets in the timeline, Twitter’s change means many more people are likely to notice and use the translation service.

On Twitter.com, the translation option doesn’t show unless a person hovers a computer’s mouse pointer over the tweet in question, aside from a small gray globe icon that indicates the translation is available. Once the words “View translation” are clicked, Twitter adds the translated version beneath a phrase such as, “Translated from Japanese by Bing.”

Twitter’s move is also a feather in Microsoft’s cap since it’s using Bing’s translation service, and as in many online activities, it is trying to catch up with Google.