Twitter Warns of Verification Phishing Emails, Ahead of $8 Subscription 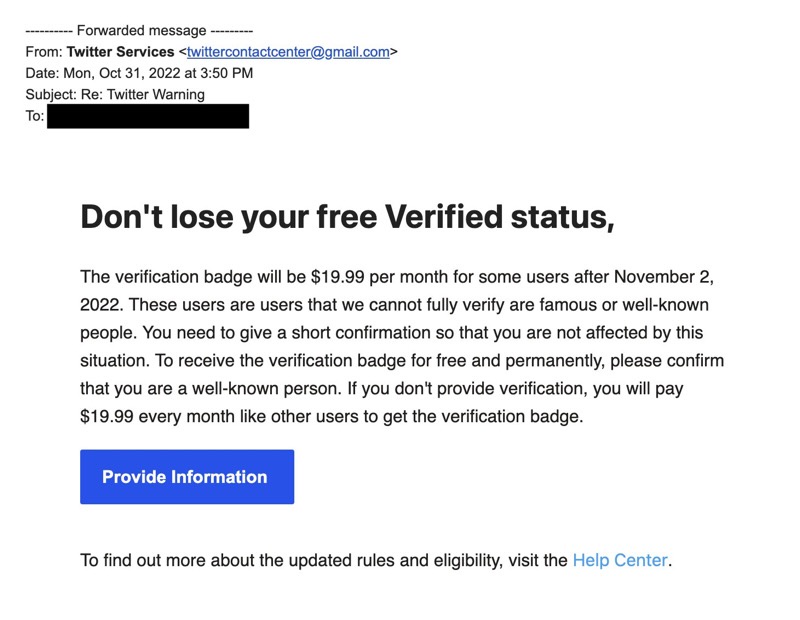 Twitter plans to charge an $8 USD per month subscription price for its Twitter Blue service, expected to come next week.

This revamped Twitter Blue service will also include the coveted verification checkmark, essentially confirming an account’s identity. Twitter will make all new and existing users pay $8 USD if they want verification, a move aimed at targeting bots and spam accounts, to literally make them pay, according to ‘Chief Twit’ Elon Musk.

On Thursday, Yoel Roth, head of Safety & Integrity at Twitter, warned of phishing emails being sent out by scammers targeting existing verified users.

“We’re hearing reports of phishing emails talking about potential changes to Verification. Be wary — nothing has launched yet, and we aren’t sending these notes. Check the sender carefully, and don’t provide your credentials or payment info,” explained Roth, while sharing two screenshots of example phishing emails.

“Don’t lose your free Verified status”, says one phishing email, which asks a user to confirm their identity to bypass a verification charge. The one email was sent from “Twitter Services” but from a Gmail address. Another screenshot shows a similar email asking to visit their billing history to add payment details for the new verification subscription.

Upcoming Twitter changes that are said to be coming? The company apparently plans to lay off 50% of its staff this Friday, while also expanding the edit button to all users for free possibly by next week. There are reportedly over 50 Tesla employees helping at Twitter to implement these swift changes coming soon.

Musk said today, “Because it consists of billions of bidirectional interactions per day, Twitter can be thought of as a collective, cybernetic super-intelligence,” adding “…with a lot of room for improvement.”