Uber’s latest video to drum up public support is in the form of a new video on YouTube, which shares how UberUMBRELLAS were out in full force in Vancouver, the city in “a province without access to ridesharing.” 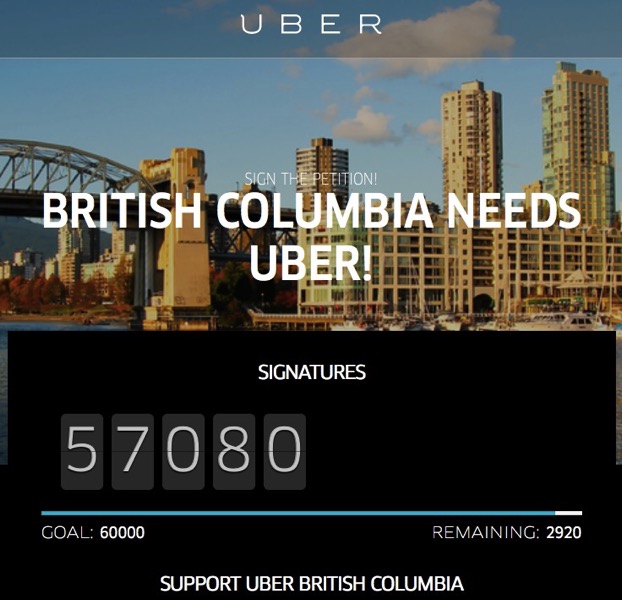 The purpose of the video is to send people to Uber’s petition page, where they can sign up to help bring the service to Vancouver. The petition reads as follows:

People in 61 countries and over 330 cities worldwide have embraced ridesharing, using Uber to complete 1 million trips every single day in cities like Seattle, Portland, Edmonton and Toronto.

But here in British Columbia, we are missing out!

Uber is a new business model, and existing regulations have not kept pace with technology. That’s why Uber wants to work with officials across British Columbia to develop common sense regulations for ridesharing that recognize and support the benefits this new business model brings to riders, drivers and cities alike.

This is your chance to send a message to elected officials across the province that British Columbia should not be left behind.

Currently, the petition has 57,080 signatures as of writing, almost at its goal of 60,000. Users who sign the petition will automatically have a pre-drafted letter sent to their municipal and provincial governments.

B.C. Transportation Minister Todd Stone recently rejected Uber’s request to have the province revise its regulations, stating “the regulatory framework is there”. Stone also says the arrival of Uber is inevitable in the province, but when UberX will actually launch remains to be seen.