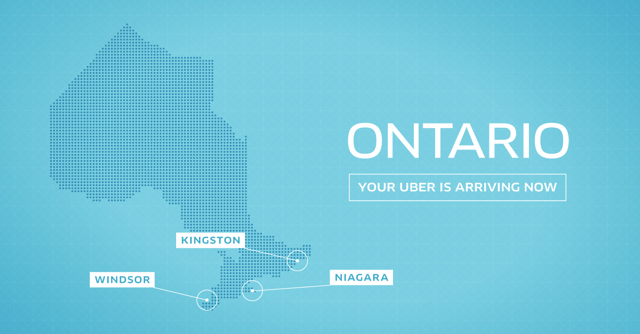 Uber Canada has today announced the launch of its highly popular, low-cost ridesharing product UberX in Windsor, Kingston and in Ontario’s Niagara region. The service will become active in these areas at 3 p.m. today, with new Uber users getting their first 2 rides free up to $20 each until Sunday, November 15 at midnight. The press release specifically highlights that all “rideshare drivers who partner with Uber” must pass a criminal background check.

“Uber’s launch today brings ridesharing to over half a million more Ontarians, who now have access to a safe, reliable, affordable way to get around. Thousands of people in these communities have already downloaded the Uber app and hundreds have signed up to earn on our platform as driver-partners,” said Ian Black, General Manager of Uber Canada. “By launching our service now, we help boost local economies – with the opening of these markets, Uber stands to create more than 500 driver partner jobs in these communities over the next year.”

According to KingstonRegion, today’s launch will be kicked off with Member of Provincial Parliament Tim Hudak taking the first ride in Niagara Falls this morning.

Uber is now available in over 350 communities worldwide, and over 40 in Ontario.

Despite engineering delays, Apple is said to be continuing work on full reverse wireless charging support for the next-generation iPhone (via 9to5Mac). (Concept image: via EverythingApplePro) Citing sources familiar with the matter, the report notes that Apple was expecting to introduce the feature with the iPhone 14 Pro, but it missed the deadline. However, the...
Usman Qureshi
9 mins ago

Apple unveiled its new HomePod second-generation last month, with the smart speaker going on sale in Canada last week. We're seeing the first teardowns of Apple's 2023 HomePod hit the web now, with YouTuber Brandon Geekabit recently sharing his disassembly of the device. On the outside, the new HomePod has a similar physical footprint to...
Nehal Malik
58 mins ago