Unlocked 16GB Pink/Yellow/Blue/Green iPhone 5c Sold Out in USA; Canada All in Stock

iPhone 5c pre-orders went live at midnight PDT on September 13 and later on in the day the 16GB yellow model was the first to sell out in the USA. Now, the initial batches of pink, blue and green models in the same 16GB capacity are also showing as sold out, with delivery dates reading “available to ship: by 9/25”. 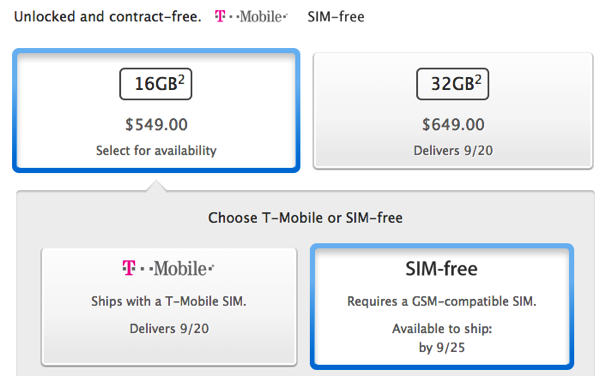 The situation is the exact opposite in Canada, where initial pre-order stock for all five colours of unlocked iPhone 5c models remain available and showing “delivers by 9/20-9/24”. Yesterday, some iPhone 5c case pre-orders received shipment email notifications only to see UPS tracking numbers that are not live yet.

Last year, Apple sold out of their iPhone 5 pre-orders shortly after launch and on the following Monday announced 5 million weekend orders, breaking the previous 4 million launch weekend record held by the iPhone 4S. The iPhone 5c appears to have plenty of stock in Canada, either due to low demand or Apple being sufficiently prepared due to an ample supply of phones.

Unfortunately, the iPhone 5s was not available for pre-order this year so if Apple does issue a press release tomorrow stating weekend pre-order numbers, it’ll only count the iPhone 5c. Stay tuned!