Get Rid of Annoying Email Subscriptions with Unroll.me for iOS

Unroll.Me, a service that lets you unsubscribe from unwanted emails, consolidate sales/newsletters emails into a convenient daily digest and help you keep your inbox uncluttered, has just released its own iOS app which is now available for download in the App Store. 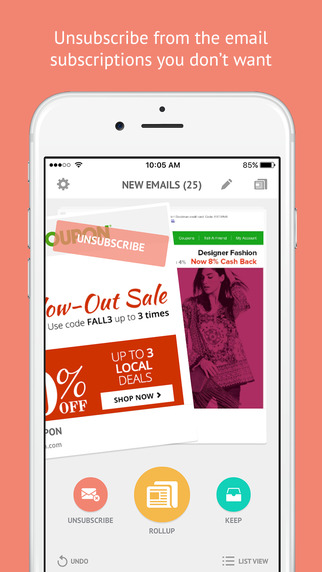 As pointed out by The Next Web, the app is simple and quite fun to use. Once you log into your email, it sifts through all of the newsletters in your inbox and sets them up as handy little cards. From there you can swipe left to quickly unsubscribe from unwanted emails, or swipe right to keep the ones you want.

Below are the main highlights of Unroll.me’s new iOS app:

Unsubscribe – Swipe left to unsubscribe from the email subscriptions you don’t want. No future emails from these senders will land in your inbox.

Rollup – Swipe up to roll up the email subscriptions you want into a daily digest, the Rollup. All future emails from these senders will bypass your inbox and be included in your daily Rollup digest.

Keep – Swipe right to keep the email subscriptions you want right in your inbox. These emails will continue to land directly in your inbox.

The Rollup is a once-daily digest containing all of the rolled up email subscriptions you receive and will be delivered each day at the time of your choosing: morning, afternoon, or evening.

Switch between multiple email accounts easily in the Settings.