The Activity app has been notifying U.S. iPhone users through a notification badge, detailing the achievement, which reads:

Earn this special achievement on Thanksgiving Day, November 24th when you complete a walk, run or wheelchair workout of at least 5K (3.1 mi) in the Apple Watch Workout app, or any app that records these workouts into the iPhone Health app. You’ll also earn a special Messages app sticker!

Below is an image of the badge, which looks like a turkey: 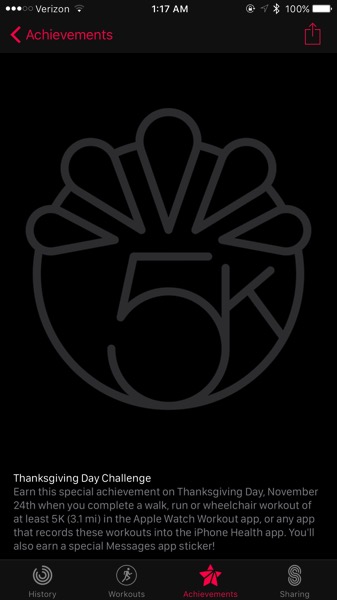 The notification for this Thanksgiving Day challenge was noticed by a Reddit user. What makes it significant is Apple could deploy these holiday-themed badges worldwide, as extra motivation for users to get active. The use of exclusive Messages stickers would surely create conversations with friends about how it was acquired—which will bring Apple Watch into the mix.

Other workout apps such as Strava offer monthly challenges for users to earn unique badges and it looks like Apple is testing these out too, starting with U.S. Thanksgiving. Let us know if you see challenges like these popping up in Canada.