Apple released iOS 12.1.1 beta today for developers and this new version comes with a few changes. 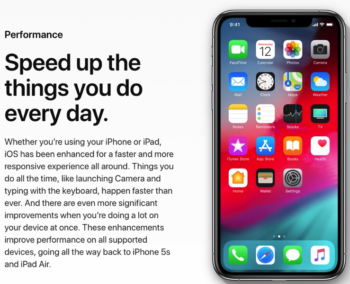 A detailed breakdown of what’s new in this version can be seen in the video below by EverythingApplePro.

This new release finally brings back a camera flip and mute icon to FaceTime, which previously was hidden within a menu. The new icons are now front and centre again, finally. Also returning is the ability to take a Live Photo during FaceTime. Both users need to be using iOS 12.1.1 for this to work.

When you restart your iPhone which has Face ID, you’ll now see a message on the lock screen which reads “Swipe up to unlock”, at the top. This reminds us of the classic “Slide to unlock” on the original iPhone.

EverythingApplePro says cellular and Wi-Fi issues have been resolved on iPhone; let us know if you’re noticing any improvements.

For iPhone 8, iPhone 8 Plus and iPhone X, Apple has added the battery management feature which throttles the device during states of low power. Previously this was not available and this year’s 2018 models may see this addition in the future.

Also, if you have a third party battery installed, the Battery Health page will now inform you.

There still remains a contacts bypass on a locked iPhone, as discovered by Jose Barraquito. If you receive a call then tap FaceTime, and try to add another contact—you’ll see the device’s full contact list.

As for performance updates or changes, a Geekbench showed comparable results to iOS 12.1.