WhatsApp can’t catch a break in Brazil. Again, the service has been blocked in the country as the company has failed to comply with a court order seeking information for a criminal investigation.

Just today, Judge Daniela Barbosa de Souza in her Rio de Janeiro court, explained WhatsApp had still not complied in providing information to authorities, hence the decision to take the service offline, by again forcing the country’s five wireless carriers to block the service, reports The Next Web.

WhatsApp CEO, Jan Koum, posted to Facebook he’s working to get the service back online. He reiterated “As we’ve said in the past, we cannot share information we don’t have access to.” 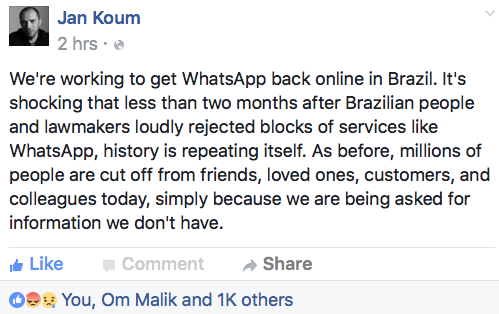 In April, WhatsApp added end-to-end encryption for its one billion users, which means the company cannot read or access user messages, what the judge is asking for. WhatsApp currently faces fines of $50,000 per day until it complies with court orders.

In the meantime, millions of users in Brazil, which rely on WhatsApp as an affordable way to communicate on mobile, have been cut off from friends and family. Today’s cut-off marks the third time in a year WhatsApp has been blocked, but most likely the ban will be lifted in a few days, yet again.

Update: As iPhone in Canada reader Mateus Cardoso in Brazil tells us, most users in the country are using Telegram as an alternative now, and they’re used to WhatsApp being blocked on the ground.

@iPhoneinCanada We got used to it. Everybody has a Telegram account.

According to a report from Bloomberg's Mark Gurman, Apple is parting ways with its Vice President of Procurement, Tony Blevins, after the latter was filmed making an inappropriate joke in a viral TikTok video. Blevins was one of Apple's top supply chain executives and one of Tim Cook's most effective cost cutters. Most recently, he worked...
Nehal Malik
26 mins ago