WhatsApp Now Lets Users React to Messages with Any Emoji

In celebration of the upcoming World Emoji Day on Sunday, July 17th, WhatsApp has announced it is rolling out an update to its iOS and Android apps that allows users to react to messages with any emoji included within their emoji keyboards (via Emojipedia).

Starting to roll out now to Android and iOS pic.twitter.com/Opk7x0n0VP

WhatsApp says the update is now rolling out across select global regions and will be available to all users in the coming weeks and months.

Below is the image shared on Instagram by Meta CEO Mark Zuckerberg: 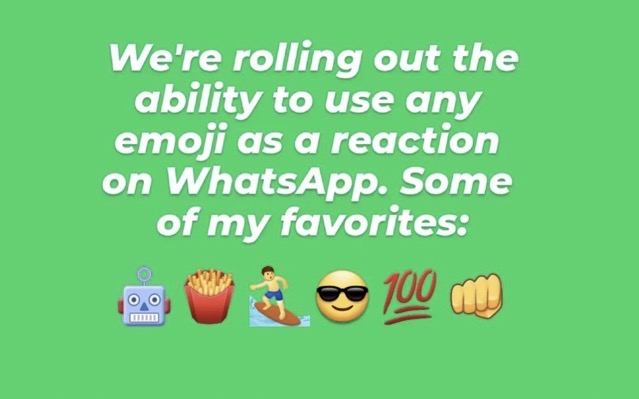 Here’s how the new feature will work:

Once they’ve downloaded the update, a WhatsApp user can press and holds on a message within WhatsApp to make the reaction menu appear as before – but now it will feature a “+” option which allows users to dive into the 3,600+ currently available emojis, including all skin tone modifier options.

For those unaware, World Emoji Day is the annual celebration of emoji use worldwide. Created and hosted by Emojipedia, the event is in its ninth year and is celebrated on July 17.