Brooks Kraft, the photographer who’s been covering the White House for over a decade, has shot this year’s Christmas decorations at 1600 Pennsylvania Avenue with an iPhone 6 Plus camera. “I’ve covered this event about 10 times before,” he told TIME, while adding that since this has “no real, intrinsic news value”, it is a good opportunity to try out new gear that he might use later in more “news-oriented environments”. 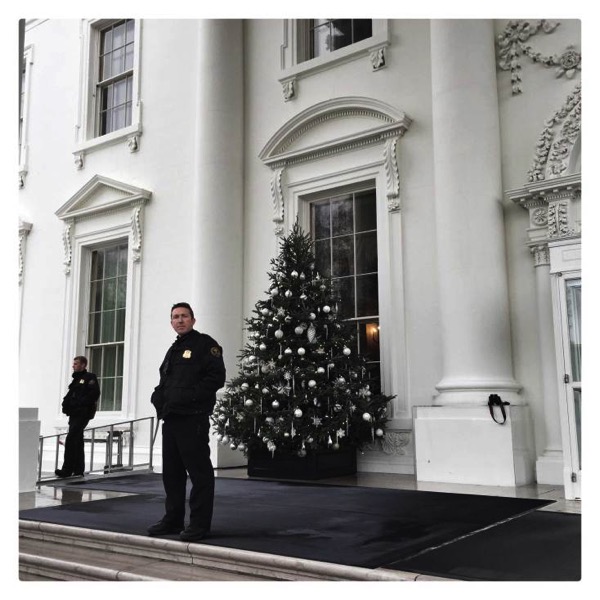 This year, Kraft has chosen to shoot in the square format with an iPhone 6 Plus, as he thought that this format would work well with the formality of the architecture in the White House. “There are a lot of mixed lights in these rooms and there’s also [natural] light, and the new iPhones do a really good job of balancing colors right out of the camera” he said, while highlighting that he likes to shoot with an iPhone because it allows him to work rapidly.

“The iPhone has a lot of depth-of-field, which allows me to shoot the [picture] and move around quickly, which worked in this situation because we were sort of ushered through the rooms and didn’t have a lot of time. I wanted to photograph most of the spaces with few people in them, so the window of opportunity in which to shoot was brief.”

Kraft uses both the iPhone 6 and 6 Plus, but in this case, he wanted to test the larger model’s new image stabilization technology, which is supposed to help in low-light situations. “Some of the rooms are quite dark, and I used the 6 Plus for that. And the larger screen also helps. There were situations when I was holding the camera above my head to try to make vertical lines more parallel on the edges of the frame, and in that case having the larger screen helped me [compose the shot].”

In the end, Kraft gives 5 tips for better shooting with an iPhone:

SaskTel is partnering with South Saskatchewan Ready (SSR) to bring the infiNET service to four communities in Southern Saskatchewan. The partnership will expand the SaskTel infiNET service, Saskatchewan’s largest fibre broadband network, to the following communities: Bengough Coronach Rockglen Willow Bunch The project is being facilitated through SaskTel’s Community Participation Program, which has been utilized by over...
Usman Qureshi
16 mins ago

Despite engineering delays, Apple is said to be continuing work on full reverse wireless charging support for the next-generation iPhone (via 9to5Mac). (Concept image: via EverythingApplePro) Citing sources familiar with the matter, the report notes that Apple was expecting to introduce the feature with the iPhone 14 Pro, but it missed the deadline. However, the...
Usman Qureshi
28 mins ago