Prior to WWDC, one rumour claimed Apple would announce expansion of iMessage to Android, but as we all know that didn’t happen. iMessage remains proprietary to iOS users, and from what one unnamed senior executive Apple executive told Walt Mossberg from The Verge, it appears it’s going to stay that way:

When I asked a senior Apple executive why iMessage wasn’t being expanded to other platforms, he gave two answers. First, he said, Apple considers its own user base of 1 billion active devices to provide a large enough data set for any possible AI learning the company is working on. And, second, having a superior messaging platform that only worked on Apple devices would help sales of those devices — the company’s classic (and successful) rationale for years.

Apple previously explained it is utilizing “differential privacy” in how it is building its AI efforts, which essentially means any data collected can’t be traced back to individual users. The company will be able to gain insights from large datasets of information but “mathematical noise” will make it impossible to pinpoint a single individual. So keeping iMessage solely for iOS users will ensure Apple is able to maintain privacy on AI data, which would be difficult should the messaging app expand to other platforms, like Android.

Of course, the second reason given makes sense, as iMessage is a key feature of iOS, watchOS and macOS, giving potential customers yet another reason to buy into the Apple ecosystem. 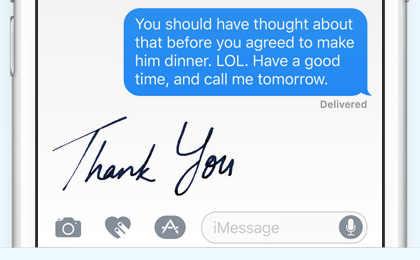 Apple’s iOS 10 preview at WWDC dedicated a large portion of the keynote to iMessage, which will come with a variety of new features, such as live link previews, handwriting support, Digital Touch, Invisible Ink, Tapback, Stickers, Tap to replace emoji, iMessage apps and more.