For the past year and a half Wickr, a messaging app for iOS and Android, has been offering an option to users who want the features of WhatsApp or Snapchat, but with an additional layer of security.

Wickr offers users the ability to send photos, videos, voice messages, and text messages that can be set to self destruct after a user defined, period of time. The messages being sent are encrypted on the sending device and then decrypted on the receiving device. The company notes that it does not have the key to unlock the data, so theoretically when the message self destructs it is gone permanently. 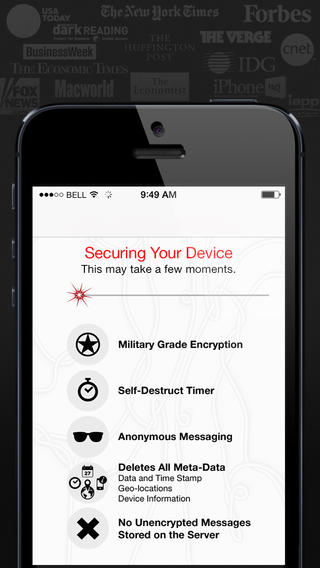 The team behind Wickr is aiming to improve its security by offering a cash reward of up to $100,000 to anyone that can find a critical vulnerability in its system.

“It’s really important to engage hackers. If someone can find critical vulnerabilities, we want to work with them. … No one has found one yet.”

“Beyond making lots of money, you can feel good about helping Wickr because we were founded to protect the basic human right of private correspondence. Private correspondence is extremely important to a free society. People all over the world depend on Wickr. Please help us with this mission.”

The company has included a “find friends” feature in the app which, unlike the one Snapchat uses, does not upload your contact list to its servers. Instead, it uses a hashed representation of the data and matches it against users in its encrypted database. After the recent security issues with Snapchat, Wickr co-founder and CEO Nico Sell told Re/code in an interview on Tuesday that:

“Snapchat hired lobbyists when they should have hired hackers.”

Sell calls the system behind the app a “zero knowledge” system, meaning the company does not store any of your personal information, not even the keys required to decrypt your data.

Wickr has been downloaded over one million times, and the company expects the one-millionth message to be sent later this month.

Sell says the company is open to licensing pieces of its technology, such as the self destruct feature, to other companies looking to make more secure products. This is something that could happen “later this year,” according to Sell. The company points out that licensing their technology will not only attract good people to use it, but unfortunately also bad people.

Wickr is available as a free download from the App Store.