Thoughts About Wireless Charging for the iPhone

Early today we posted a patent that Apple has filed regarding inductive charging through headphones and earlier we told you about a WSJ report about charging. But what about some other possibilities?

Two that I want to bring up are WiTricity and uBeam.

Rumours have come up that Apple is interested in WiTricity. This company is developing a wireless charging solution. It is similar to the patent revealed today but you wouldn’t wrap anything around a paper towel tube in order for it to charge. The energy is transmitted through magnetic fields in the air. It is reported that this is safe as long as you pay attention to the intensity of the magnetic field. 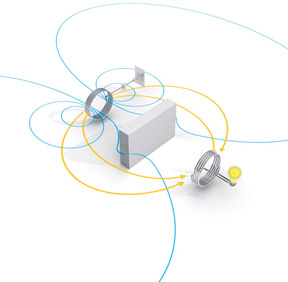 The other technology being developed that I think is really cool is by uBeam.

This doesn’t use magnetic fields or induction to charge – it uses sound. But wouldn’t that be annoying int he house? No because they use a frequency too high for the human ear to register – ultrasound.

Their charging station plugs into the wall and emits this ultrasound which is absorbed by an adapter that can be on a multitude of devices. This adapter converts the sound into electrical energy using piezoelectric material – it converts variations in air pressure into electricity.

Imagine a speaker-like device on your ceiling that will allow multiple devices to charge at the same time. I think it could be kind of cool.

There is another video about uBeam on their website, check it out here.

If the price is right, I would be very eager to install one of these since the main reason I still plug my phone in is to charge it. Would you be interested?