Xiaomi is Now the Most Valuable Tech Startup in the World

Chinese smartphone maker Xiaomi has announced that it has raised another $1.1 billion in its latest funding round, which makes it the world’s most valuable technology start-up. The company’s current valuation of $46 billion, which includes the fresh capital, has put it above all other startups currently backed by venture capitalists, The Wall Street Journal reports. The real test now for the company will be to live up to the investors’ high expectations. 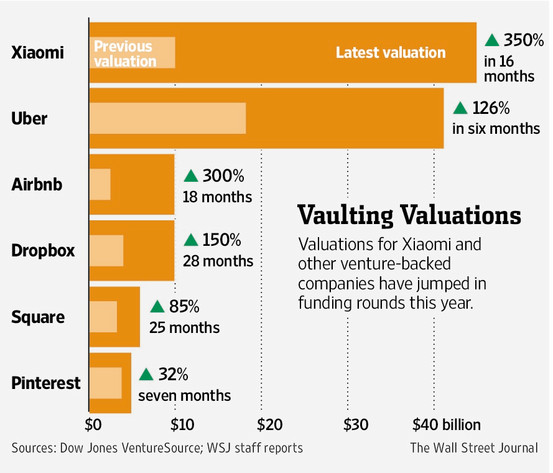 Xiaomi’s founder Lei Jun made the announcement in a brief posting on his page on the popular Chinese microblogging site, Sina Weibo. Lei said a range of investors participated in the round, including All-Stars Investment Ltd., DST Global and Singapore sovereign-wealth fund GIC Pte. Ltd. “This round of funding is an affirmation of Xiaomi’s achievements in more than four years of business and a prelude to a new stage of development,” Mr. Lei wrote. According to Hans Tung, a managing partner at GGV Capital and an early investor in Xiaomi, Mr. Lei’s vision for Xiaomi was already clear even before he founded the company in April 2010.

“I thought, ‘you got a lot of guts to go after the phone market. That hardware sector is hard,’” Mr. Tung recalled in a recent interview. Mr. Lei’s pitch to Mr. Tung was that he would bring hardware, software and apps together like Apple Inc. had done. But unlike Apple, Mr. Lei’s company would sell its products mainly through the Internet. Mr. Tung said part of what convinced him was Mr. Lei’s previous experience in e-commerce, online games and business software.

“Xiaomi has started a phenomenon in the Chinese market, and we have studied Xiaomi’s business model,” said Ni Fei, head of the Chinese smartphone brand Nubia, a unit of ZTE Corp. ZTE launched Nubia as a subbrand in 2012 to focus on online sales and social-media marketing.

Xiaomi overtook Samsung earlier this year to become the largest smartphone vendor in China. This year, the company expects to sell 60 million smartphones globally, up from 18.7 million last year.