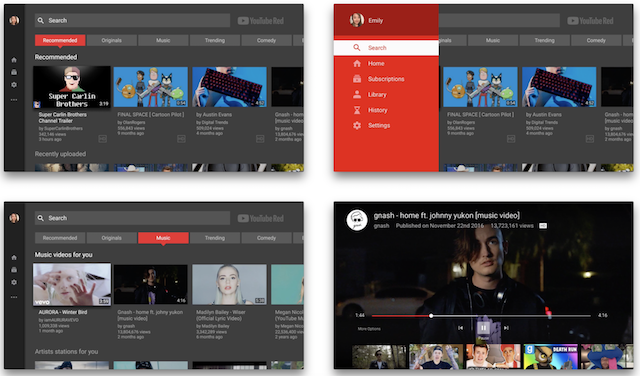 YouTube has released an all-new, fully redesigned version of its Apple TV app, which now looks pretty much like a port of the app experience on other platforms, including YouTube clients built in to smart TVs. As pointed by the folks over at 9to5Mac however, the update doesn’t exactly improve the viewing experience on Apple TV.

“Developers have been able to make custom apps for Apple TV since the introduction of tvOS a few years ago, but Google did not initially take advantage of this until now.

Like a lot of other video apps from major services, YouTube hasn’t exactly made an app tailored to Apple TV. However, it does feel more app-like with the new version and less like the old version ported from the more restricted client made for older Apple TVs.”

The updated YouTube app still doesn’t take advantage of Top Shelf which serves up video recommendations when the app is on the top row. Also, there’s still the whole 4K content fight happening between Google and Apple over video formats. YouTube will badge UHD videos with a 4K tag on Apple TV 4K, but video playback is still restricted to 1080p according to the video inspector.

Video playback on the new version of YouTube however does support frame rate switching between 24, 30, and 60 fps. You can grab the free update by simply clicking the update button on YouTube for tvOS on your Apple TV.

Twitter CEO Elon Musk on Saturday shared slides from a recent internal meeting where he detailed his plans for "Twitter 2.0." https://twitter.com/elonmusk/status/1596718851097755648 Musk has made it clear that he wants to turn Twitter into "the everything app" he has envisioned for quite some time now. According to Musk's presentation, Twitter is actually hiring right now....
Nehal Malik
37 mins ago