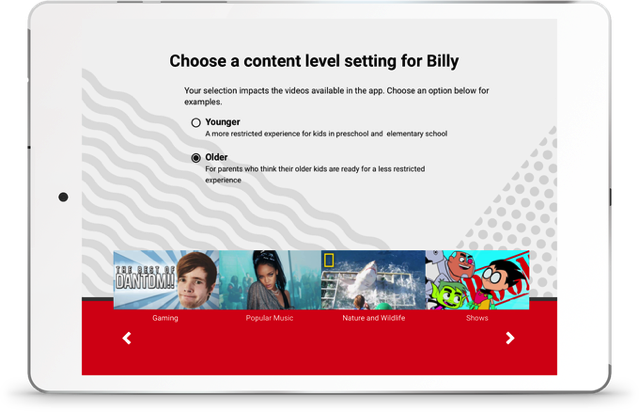 As pointed out by TechCrunch, the latest update to the YouTube Kids app has added a new whitelisting parental control feature that gives parents the ability to explicitly whitelist every channel or video they want to be available to their kids.

In addition to giving parents more control over what their kids watch, the updated app also brings a new experience for tween viewers aged 8 through 12 and adds new content, like popular music and gaming videos.

With the manual whitelisting feature, parents can visit the app’s Settings, go to their child’s profile, and toggle on an “Approved Content Only” option. They can then handpick the videos they want their kids to have access to watch through the YouTube Kids app.

Parents can opt to add any video, channel, or collection of channels they like by tapping the “+” button, or they can search for a specific creator or video through this interface.

With the new whitelisting mode enabled, kids can longer search for content the YouTube Kids app on their own. The feature is particularly useful for those with very young children who aren’t comfortable with YouTube Kids’ newer “human-reviewed channels” filtering option, as mistakes could still slip through.

Meanwhile, the other new feature allows parents to turn on the “Older” content level setting that opens up YouTube Kids to include less restricted content for kids ages 8 to 12.

The new parental controls are rolling today globally on Android and coming soon to iOS, whereas the “Older” option is initially being rolled out only in the U.S.